Saving My Enemy: How Two WWII Soldiers Fought Against Each Other and Later Forged a Friendship That Saved Their Lives (World War II Collection) (Paperback) 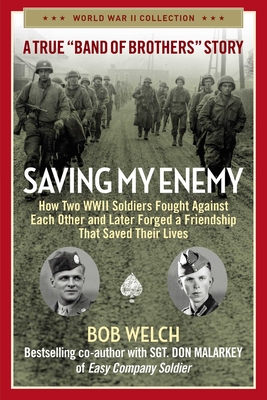 Saving My Enemy: How Two WWII Soldiers Fought Against Each Other and Later Forged a Friendship That Saved Their Lives (World War II Collection) (Paperback)


Ships to Our Store in 1-5 Days
Two soliders of World War II, one American, a member of the Easy Company "Band of Brothers," and one a German, fight in the Battle of the Bulge, then meet decades later and help deliver one another from the nightmares of war. Stephen E. Ambrose and E.B. Fledge fans will exult in this tale of conflict and healing.

“A quintessential tale. Once read, never to be forgotten.” —Erik Jendersen, lead writer of Band of Brothers on HBO

Saving My Enemy is a “Band of Brothers” sequel like no other.

Fritz Engelbert’s German boyhood couldn’t have been more different. Regimented and indoctrinated by the Hitler Youth, he was introspective and a loner.

Both men fought in the Battle of the Bulge, the horrific climax of World War II in Europe. A paratrooper in the U.S. Army, Malarkey served a longer continuous stretch on the bloody front lines than any man in Easy Company. Engelbert, though he never killed an enemy soldier, spent decades wracked by guilt over his participation in the Nazi war effort.

On the sixtieth anniversary of the start of the Battle of the Bulge, these two survivors met. Malarkey was a celebrity, having been featured in the HBO miniseries Band of Brothers, while Engelbert had passed the years in the obscurity of a remote German village.

But both men were still scarred— haunted—by nightmares of war. And finally, after they met, they were able to save each other’s lives.

Saving My Enemy is the unforgettable true story of two soldiers on opposing sides who became brothers in arms.
Bob Welch previously collaborated with Band of Brothers hero Don Malarkey on his memoir Easy Company Soldier: The Legendary Battles of a Sergeant from World War II’s “Band of Brothers.” He has conducted hours of interviews with World War II veterans and their families and is the author of more than a dozen books on World War II and other topics.