What the Children Told Us: The Untold Story of the Famous "Doll Test" and the Black Psychologists Who Changed the World (Hardcover) 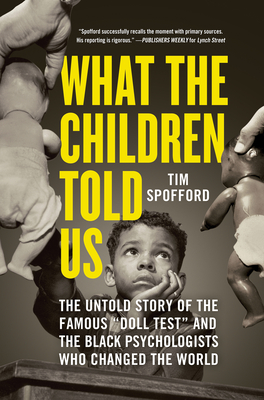 What the Children Told Us: The Untold Story of the Famous "Doll Test" and the Black Psychologists Who Changed the World (Hardcover)

Does racial discrimination harm Black children's sense of self?

Dr. Kenneth Clark visited rundown and under-resourced segregated schools across America, presenting Black children with two dolls: a white one with hair painted yellow and a brown one with hair painted black. "Give me the doll you like to play with," he said. "Give me the doll that is a nice doll." The psychological experiment Kenneth developed with his wife, Mamie, designed to measure how segregation affected Black children's perception of themselves and other Black people, was enlightening—and horrifying. Over and over again, the young children—some not yet five years old—selected the white doll as preferable, and the brown doll as "bad." Some children even denied their race. "Yes," said brown-skinned Joan W., age six, when questioned about her affection for the light-skinned doll. "I would like to be white."

What the Children Told Us is the story of the towering intellectual and emotional partnership between two Black scholars who highlighted the psychological effects of racial segregation. The Clarks' story is one of courage, love, and an unfailing belief that Black children deserved better than what society was prepared to give them, and their unrelenting activism played a critical role in the landmark Brown v. Board of Education case. The Clarks' decades of impassioned advocacy, their inspiring marriage, and their enduring work shines a light on the power of passion in an unjust world.

Tim Spofford's writing career has focused on racial issues in education. Spofford has taught writing and journalism in schools and colleges and has a Doctor of Arts in English degree from the State University of New York at Albany. His work has appeared in the New York Times, Newsday, Mother Jones, and other publications. He lives with his wife, Barbara, in St. Petersburg, Florida, and Lee, Massachusetts. Visit him at timspoffordbooks.com

"For readers interested in a unique tale at the intersection of psychology, race, and activism, Spofford's in-depth portrait of the Clarks will be welcome reading." — Kirkus Reviews

"Part biography, part history, and part psychological study, this emotionally charged book chronicles.... the lives and works of two extraordinary individuals who fought for racial justice and equality in one of our nation's darkest hours." — Booklist

""What the Children Told Us is straightforward reportage. It is heavily researched and documented and adds flesh to some of the bones of knowledge about the 1940s, the psychological community, and growing civil rights efforts"" — Historical Novel Society

"The first book to detail the extensive work of two major contributors on the psychological effects of segregation is a worthwhile addition to collections." — Library Journal