The American Way of Empire: How America Won a World--But Lost Her Way (Paperback) 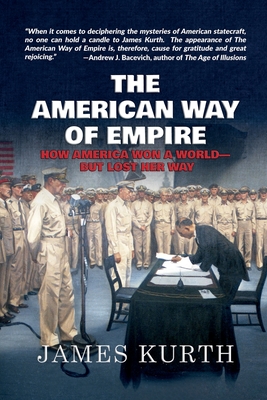 The American Way of Empire: How America Won a World--But Lost Her Way (Paperback)

Since the September 11th, 2001 attacks on the World Trade Center and Pentagon, traditional American foreign policy has proven inadequate to 21st Century challenges of Islamic terrorism and globalization.

In this ground-breaking analysis, author James Kurth explains that the roots of America's current foreign policy crisis lie in contradictions of an American empire which attempted to transform traditional American national interests promoted by Presidents like Teddy Roosevelt and FDR into a new American-led global order that has unsucessfully attempted to promote supposedly universal, rather than uniquely American, ideals.

And so, the book begins, on its front cover, with a depiction of the moment when the American Empire, and the "American Century," were born...