Friend or Foe: The Whole Truth about Animals That People Love to Hate (Hardcover) 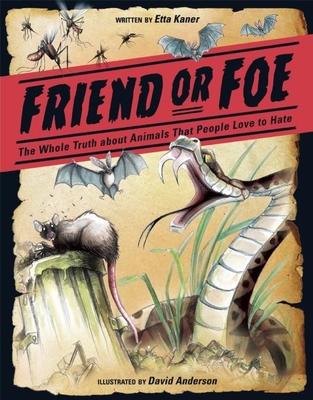 Friend or Foe: The Whole Truth about Animals That People Love to Hate (Hardcover)


Currently Unavailable
Rats, mosquitoes, bats, cockroaches, leeches, vultures -- it's easy to fear and despise them. But are they all bad? You probably know that rats destroy food supplies and can cause house fires when they gnaw on electrical wires, but did you know their supersensitive noses can help detect tuberculosis or even land mines? Are these conventionally icky critters really public enemies, or do they have merits worth appreciating? Friend or Foe takes a close look at what we dislike about each of 10 unpopular animals, and then presents the flip side: these very same animals are often smart, helpful to humans and the environment, or inspiring to scientists. After each pair of polarizing spreads, readers are asked to decide for themselves if the animal is friend or foe. Fascinating research and anecdotes, fun design inspired by propaganda posters, and playful use of persuasive language and point of view make Friend or Foe an engaging read that will leave readers reconsidering common perceptions.

Etta Kaner writes for both children and educators. The majority of her children's books are non-fiction and have been translated into many languages. Several of her books have won awards including the Ontario Library Association's Silver Birch Award, the Henry Bergh Award, the Animal Behaviour Society Award, Scientific American Young Readers Book Award, and the Science in Society Book Award. While her earlier books were inspired by her two daughters, many of her later books have been inspired by elementary school students that she teaches. Etta lives in Toronto. David Anderson is an illustrator and cartoonist with a background as a political cartoonist in several South African newspapers. His Canadian clients include Kids Can Press, Rogers Media, Bell Global Media, Can West, Nissan Canada, General Mills, and Met Life. He has won several national awards, including The Standard Bank Cartoon of the Year (South Africa) and the Duncan Macpherson Award for Editorial Cartooning (Canada). His work is syndicated worldwide by The New York Times Syndicate and Cartoonists and Writers Syndicate in California. He is also the author and illustrator of two children's books, and the illustrator of And The Winner Is... (Kids Can Press, 2013). David is based in Toronto, Ontario.