Almost Islands: Phyllis Webb and the Pursuit of the Unwritten (Paperback) 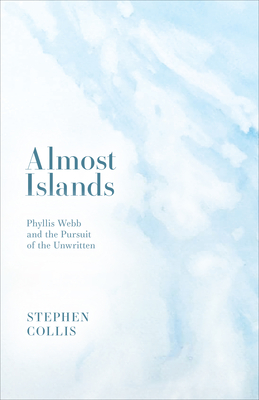 Almost Islands: Phyllis Webb and the Pursuit of the Unwritten (Paperback)

Almost Islands is a powerfully introspective memoir of the author's friendship with legendary Canadian poet Phyllis Webb - now in her nineties and long enveloped in silence - and his regular trips to see her. It is an extended meditation on literary ambition and failure, poetry and politics, choice and chance, location, colonization, and climate change - the struggle that is writing, and the end of writing.

I go to see her because she is poetry's old crone and I am seeking. I go to her - usually three, four times a year - because it is a small ministration I can perform for her, and for her poetry, as she slowly reaches into the finite - a long, slow embrace of nothing ... If living is a process of learning how to die, then is writing a process of learning how to stop writing? I go in search of lost words, in search of the hoped-for defence against the loss of words, drawn to the shaping sounds of fate and mortality. A meticulous collection of poetic, political, and philosophical digressions, Almost Islands weaves numerous themes together. At its crux lies a literary project: to build upon and extend Webb's exposition of a "poetic" sense of the political, by proposing a political agent, the "Biotariat," a government of Life, that is both human and more than human - arrived at after following as many pathways as possible through Webb's own reading and thought. Ultimately, Almost Islands is a book obsessed with the problem of Webb's not writing, and the implications of this for a writer like Collis who, in his own words, may be writing "too much" - as well as the wider social, political, and world-historical implications of withdrawal, self-silencing, and not-doing.
Stephen Collis's many books of poetry include The Commons (Talonbooks, 2008; 2014), On the Material (Talonbooks, 2010 - awarded the BC Book Prize for Poetry), DECOMP (with Jordan Scott - Coach House, 2013), and Once in Blockadia (Talonbooks 2016 - nominated for the George Ryga Award for Social Awareness in Literature). He has also written two books of literary criticism, a book of essays on the Occupy Movement, and a novel. Almost Islands is a forthcoming memoir, and a long poem, Sketch of a Poem I Will Not Have Written, is in progress. He lives near Vancouver, on unceded Coast Salish Territory, and teaches poetry and poetics at Simon Fraser University.