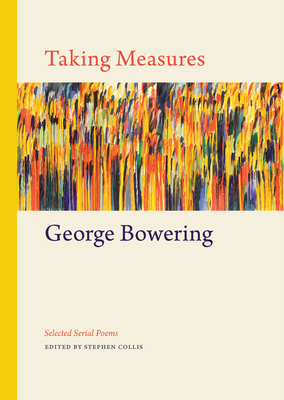 The first-ever collection of the major serial poems by Canada's inaugural Parliamentory Poet Laureate, George Bowering, Taking Measures includes work from each of the last six decades, beginning with Bowering's engagement with process-based long poems in the 1960s and 1970s and moving through his continued exploration of the form in recent decades. Containing well-known Bowering texts, including Allophanes, Autobiology, Delayed Mercy, Gen ve, and Kerrisdale Elegies, as well as Baseball, At War with the U.S., Irritable Reaching, Smoking Mirror, Do Sink, His Life, and Los P janos de Tenacatita, Taking Measures offers a new and revealing look at this acclaimed and prolific author's poetic development and contribution to Canadian writing.

The serial poem is a hybrid genre, stitching short lyrics together into sequential, long (typically book-length) poems; Bowering's innovative use of the form, always rooted in an engagement with place, with language, and with the intertwining of the two, shows him at his experimental and irreverent best, his trademark playful seriousness extended and expanded, producing poetry that remains compelling, complex, and exciting decades after its composition. Edited by the award-winning poet Stephen Collis, Taking Measures offers a career-spanning and revelatory sample of one of Canada's best-known and most versatile writers.

George Bowering, Canada's first Poet Laureate, was born in the Okanagan Valley.After serving as an aerial photographer in the Royal Canadian Air Force, Bowering earned a BA in English and an MA in history at the University of British Columbia, where he became one of the co-founders of the avant-garde poetry magazine TISH. He has taught literature at the University of Calgary, the University of Western Ontario, and Simon Fraser University, and he continues to act as a Canadian literary ambassador at international conferences and readings.A distinguished novelist, poet, editor, professor, historian, and tireless supporter of fellow writers, Bowering has authored more than eighty books, including works of poetry, fiction, autobiography, biography and youth fiction. His writing has also been translated into French, Spanish, Italian, German, Chinese, and Romanian.Bowering has twice won the Governor General's Award, Canada's top literary prize. In 2019 he received the George Woodcock Lifetime Achievement for an outstanding literary career in British Columbia.