Watches: A Complete History of the Technical and Decorative Development of the Watch (Hardcover) 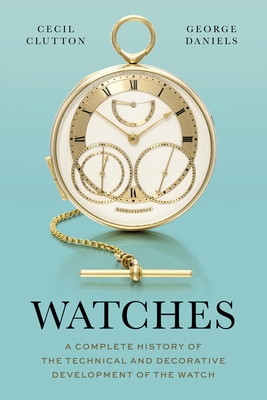 Watches: A Complete History of the Technical and Decorative Development of the Watch (Hardcover)

A long-awaited reprint of an important illustrated reference work on the general history of the watch from 1500 to 1980.

When Watches was first published in 1965 it quickly gained for itself a reputation as the foremost general history of the subject and, following the expanded edition in 1979 which covered recent years past 1830, this has remained unchallenged in horological history.

In this long-awaited reprinted edition, collectors and horological students can again make use of the reference illustrations and history in this work as approached by the leading horology historians and clockmakers of the twentieth century. Clutton and Daniels write expertly on the vast history of watches, through the changing tastes and styles of collectors and makers, as well as imparting their own knowledge on various technical aspects within the watches.

The expansive historical section encompasses both decorative and mechanical aspects of mid-sixteenth to late twentieth century watches, including those by George Daniels himself, detailing the rich history behind more modern designs and fascinations. These later years include a variety of semi-experimental escapements, as well as covering the development of the precision watch and work leading to it by Ferdinand Berthoud and Pierre Le Roy, discussed alongside John Arnold in England, to satisfy the technical-minded collector.

Horology and collecting have grown with the changing technologies, and watches continue to be produced to an exceptional technological standard. Precision watches from the 1730-1930 period are covered in detail, as well as high standard Swiss and American watches of the last hundred years; these highly complicated watches benefit greatly from having both colour and mono illustrations to clarify the details. For a truly comprehensive understanding of escapements, photographs of these have been included alongside a critical approach to this essential mechanism.

Since its first publication, Watches has provided an essential work of reference and history behind some of the most renowned minds and creations. Now reprinted for a new generation of collectors and students, and featuring over 600 illustrations, the technical and decorative elements of historical watches can be studied and enjoyed once more.

George Daniels, CBE, HON DSC, FSA, FCGI, FBHI, FAWI was a practising horologist with over fifty years' experience in both antiquarian and modern watchmaking and was a past master of the Worshipful Company of Clockmakers. In addition, he was an expert on the history and development of the watch, with special emphasis on the precision period of the late eighteenth and early nineteenth centuries. He was unrivalled as a sympathetic restorer of important time pieces, especially those made by Breguet. Amongst his awards for his contribution to the art and science of watchmaking including the design of his own escapements were the Tompion Gold Medal, The British Horological Institute Gold Medal, The City and Guilds of London Gold Medal, The Arts Sciences and Learning Award of the City of London and the Victor Kullberg Medal of the Stockholm Watchmakers' Guild.

Cecil Clutton (1909–1991), CBE, FSA had many interests from flying, early keyboard music, pipe organs, vintage cars and motorcycles. He was president of the Vintage Sports Car Club and raced for most of his life. He had a wide interest in antiquarian horology and was one of the founder-members of the Antiquarian Horology Society as well as a past master of the of the Worshipful Company of Clockmakers – some watches from his very well-known collection are now housed in the British Museum. Clutton edited two past editions of Old Clocks and Watches and their Makers and, in joint authorship with George Daniels, wrote Clocks and Watches in the Collection of the Worshipful Company of Clockmakers.

"Watches is a truly wondrous publication, unlike anything produced before or since. Immensely readable and highly informative." - Horological Journal

"From a technical standpoint the collection of close-up black and white photographs covering a wide range of escapements is fascinating as is the historical write-up of the twists and turns of their development. [...] To have all the major as well as some lesser known escapements depicted in one source is invaluable. [...] given the breadth and quality of this new edition I am sure that it will be the go-to reference source" - The TimePiece (British Watch and Clock Makers' Guild)

"Watches — A Complete History of the Technical and Decorative Development of the Watch is a book for anyone interested in this topic. It is a very detailed work by two of the most renewed experts on this subject. It is also just as valuable and useful today as it was decades ago." - Balázs Ferenczi, Fratello

"It is quite simply the only decent book encapsulating the history of the pocket watch that has ever been written [...] this edition is a beautiful and faithful reproduction of the heavily revised 1979 edition." - Ben Wright, Antiques Road Show watch and clock expert, Antiquarian Horology