The Time-Travelling Cat and the Aztec Sacrifice (Paperback) 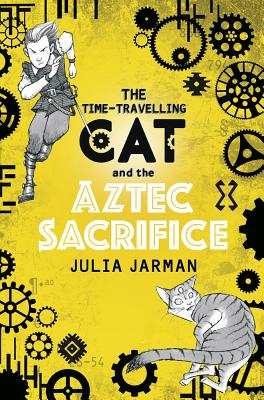 The Time-Travelling Cat and the Aztec Sacrifice (Paperback)

This is book number 4 in the Time-Travelling Cat series.

Topher is desperate to find his beloved cat Ka when she disappears, leaving a single clue on his computer:
TENOCHT*I*TLaN.
When Topher follows Ka back in time, finds himself in the dangerous world of the Aztecs. The people of the wondrous, floating city of Tenochtitlan believe Ka is one of their gods, but El Sol, a piratical Spanish conquistador, thinks she is a witch.
Can Topher save Ka from El Sol, rescue Pima, a girl the Aztecs want to sacrifice, and escape from Tenochtitlan before it is destroyed?

Julia Jarman is a schoolteacher and journalist. She has written over 80 books for children. She now devotes a lot of time to school and library visits.
"Fast moving adventure. This book could be used as a class novel alongside studying Aztecs or as an individual reader for KS2" - - The Teacher

"I liked this book. After reading just the first chapter It was so good I knew I wanted to read another book by Julia Jarman" - - Carlisle News & Star