Soupy Twists!: The Full Official Story of the Sophisticated Silliness of Fry and Laurie (Hardcover) 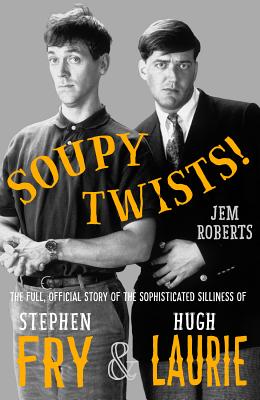 Jem Roberts was born in Ludlow in 1978, gained his first professional writing gig as a teenage games journalist, and has over twenty years of magazine toil under his belt. As a comedy performer, he has inflicted his noises on audiences from Edinburgh to Glastonbury Festival, solo and with his troupe, The Unrelated Family. His love of I'm Sorry, I Haven't a Clue led to his first officially authorised book book, The Clue Bible, in 2009, and a lifetime's obsession meant that the ultimate guide to Blackadder had to follow, with 2012's The True History of the Black Adder. In 2014, he became the official biographer of Douglas Adams, with The Frood marking his third release from Preface Publishing. Soupy Twists! is his fourth work of comedy history. Also published by Unbound in 2018 is Tales of Britain, the first British folktale treaty in over thirty years, which Roberts performs all over the UK. jemroberts.com/@jemroberts