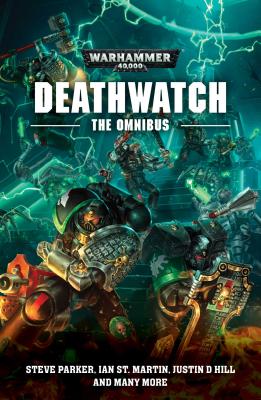 The Deathwatch are the elite. Recruited from numerous Space Marine Chapters, their mission is simple: exterminate any xenos threat to the Imperium. Assembled into kill-teams, the Deathwatch are expert alien hunters, equipped to undertake any mission in any environment. None are as dedicated or as skilled in the brutal art of alien annihilation. This action-packed omnibus contains three separate novels written by Steve Parker, Ian St Martin and Justin D Hill, along with a dozen of the best short stories ever written about the Imperium's premier xenos hunters.
Originally hailing from the rain-swept land of the Picts, Steve Parker currently resides in Tokyo, Japan, where he runs a specialist coaching business for men and writes genre fiction. His published works include the novels Rebel Winter, Gunheads, Rynn's World, Deathwatch, Deathwatch: Shadowbreaker, the novella Survivor, and several short stories featuring the Deathwatch kill-team Talon Squad, the Crimson Fists and various Astra Militarum regiments.

Justin D Hill is the author of the Necromunda novel Terminal Overkill, the Warhammer 40,000 novels Cadia Stands and Cadian Honour, the Space Marine Battles novel Storm of Damocles and the short stories ‘Last Step Backwards’, ‘Lost Hope’ and ‘The Battle of Tyrok Fields’, following the adventures of Lord Castellan Ursarkar E. Creed. He has also written ‘Truth Is My Weapon’, and the Warhammer tales ‘Golgfag’s Revenge’ and ‘The Battle of Whitestone’. His novels have won a number of prizes, as well as being Washington Post and Sunday Times Books of the Year. He lives ten miles uphill from York, where he is indoctrinating his four children in the 40K lore.

Ian St. Martin is the author of the Horus Heresy: Primarchs novel Angron: Slave of Nuceria and the audio drama Konrad Curze: A Lesson in Darkness. He has also written the Warhammer 40,000 novels Of Honour and Iron, Lucius: The Faultless Blade and Deathwatch: Kryptman’s War, along with the novella Steel Daemon and several short stories. He lives and works in Washington DC, caring for his cat and reading anything within reach.