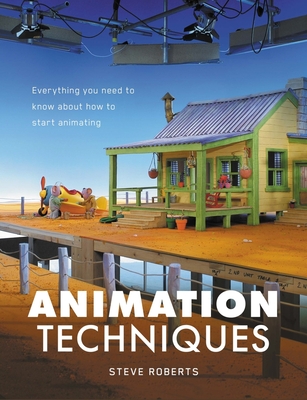 
Ships to Our Store in 1-5 Days
Animation can be used to illustrate, simplify and explain complicated subjects, as well as to transform stories into engaging, fantastical narratives. There are many types of animation, all of which can incorporate different artistic techniques such as sculpture, drawing, painting, printing and textiles.

In this practical guide, animation tutor Steve Roberts explores the twelve basic principles of animation, demonstrating the different techniques available and offering helpful exercises for readers to practice in their chosen style.

From pencils to pixels, flip books to feature films, and plasticine to puppets, this helpful book covers everything you need to know about how to start animating and will be of great interest for anyone looking to learn how to make their own animated films.
Steve Roberts is the Lead Animation Tutor and Senior Lecturer in Character Animation at Central Saint Martins, University of London. He has worked in the British animation industry for over forty years, for luminaries such as Walt Disney, Warner Brothers, the BBC, Channel 4, Bob Godfrey and many others.

As an animation director his films have been shown worldwide and won prizes from organizations such as the Royal Television Society, The IVCA and The New York Film and Television Awards. Steve has written the curriculum for several well-respected animation courses and has guided hundreds of students into the animation industry.
"Finally! A forthright approach to a complex art form. An inspired text that fuses an essential understanding of fundamental traditional methods and technology". —Rita Osei, Animation & Graphics Producer, Cartoon Network, on Character Animation

"It was surely a matter of time before a publication like this emerged. An understanding of basic animation principles is often overlooked in 3D computer animation. This book will do much to put that right; it is an essential source of knowledge, which will enable 2D and 3D animators to understand each other's purpose." —Oscar winning animation director Daniel Greaves of Tandem Films on Character Animation

"A fantastic, comprehensive, but above all practical guide to character animation. The well-pitched progressive exercises at the core of this book make it a must have for all serious animation wannabes." —Andrew Lindsay, Senior Animator, Lionhead Studios. on Character Animation