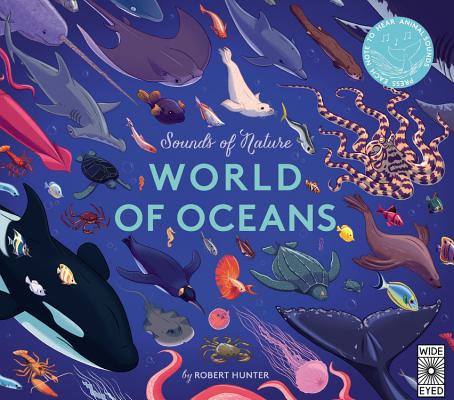 
Currently Unavailable
Travel the world with the Sounds of Nature series – press the note in each of the 10 ocean habitats to hear vivid recordings of over 60 different marine animal sounds.

The Sounds of Nature series brings the natural world to life with the sounds of real animals recorded in the wild. Captivating edge-to-edge illustrations show animals in action in their habitats around the globe. The animals are numbered in the order they can be heard, with fascinating facts and descriptions of the sounds they make, so you can listen out for each one. A speaker set into the back cover plays a sound clip when you press firmly on the note in each illustration. The battery is already installed, so simply open and explore.

Listen to these and more watery places come to life as you hear the:Dip your toe in, hold your breath and get ready to plunge into the deep blue oceans that cover our planet!

Robert Hunter is a London based illustrator who works with traditional drawing and printing techniques to produce his otherworldly picture narratives. His clients include The New York Times, The Guardian, V&A, Picador, BBC, and Latitude Festival. His previous books include The Land of Nod (Flying Eye, 2016) and The Jungle Book (Frances Lincoln, 2016).

Irish-born Claire Grace studied English and Philosophy before becoming a commissioning editor of children’s books. She is the author of many books for children and has worked on a collection of award-winning titles. She now lives in London where she spends her time writing, drinking coffee, and dog spotting.