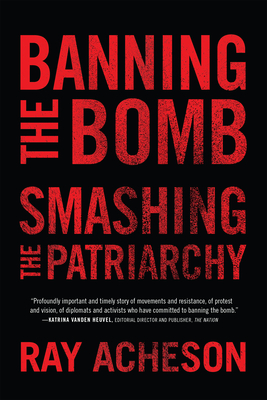 By Ray Acheson
Email or call for price

Banning the Bomb, Smashing the Patriarchy offers a look inside the antinuclear movement and its recent successful campaign to ban the bomb. From scrappy organizing to winning the Nobel Peace Prize in 2017 and achieving a landmark UN treaty banning nuclear weapons, this book narrates the journey of the International Campaign to Abolish Nuclear Weapons (ICAN) and developments in feminist disarmament activism. Acheson explains the process through which diplomats, activists, and nuclear survivors worked together to elevate the horrific humanitarian and environmental impacts of nuclear weapons, develop new international law categorically prohibiting the bomb, challenge the nuclear orthodoxy, and strengthen norms for disarmament and peace. Told from the perspective of a queer feminist antimilitarist organizer who was involved from the start of the process through to the treaty's adoption, the book utilizes interviews with dozens of participants, as well as critical theoretical perspectives about transnational advocacy networks, discourse change, and intersectional feminist action. It is meant to provide useful insights for anyone trying to make change amidst structures of power and politics.

Ray Acheson is currently director of the Women's International League for Peace and Freedom's disarmament program in New York City. Ray leads the organization's work on stigmatizing war and violence, advocating and organizing for disarmament, and raising feminist perspectives on militarism and weapons. Ray represents WILPF within the International Steering Group of the International Campaign to Abolish Nuclear Weapons (ICAN), which won the 2017 Nobel Peace Prize. Ray has been awarded the 2020 Nuclear Free Future Award and the 2018 UN Women Metro New York Champion of Change prize.