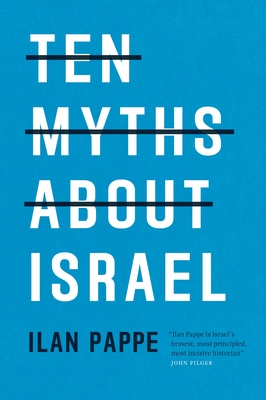 In this groundbreaking book, published on the fiftieth anniversary of the Occupation, the outspoken and radical Israeli historian Ilan Pappe examines the most contested ideas concerning the origins and identity of the contemporary state of Israel.

The “ten myths” that Pappe explores—repeated endlessly in the media, enforced by the military, accepted without question by the world’s governments—reinforce the regional status quo. He explores the claim that Palestine was an empty land at the time of the Balfour Declaration, as well as the formation of Zionism and its role in the early decades of nation building. He asks whether the Palestinians voluntarily left their homeland in 1948, and whether June 1967 was a war of “no choice.” Turning to the myths surrounding the failures of the Camp David Accords and the official reasons for the attacks on Gaza, Pappe explains why the two-state solution is no longer viable.

Ilan Pappe is an Israeli historian and socialist activist. He is a professor with the College of Social Sciences and International Studies at the University of Exeter, Director of the university’s European Centre for Palestine Studies, and Co-Director of the Exeter Centre for Ethno-Political Studies. He is the author of the highly acclaimed The Ethnic Cleansing of Palestine and The Idea of Israel—which was shortlisted for the JQ Wingate History Prize, as well as two co-authored projects with Noam Chomsky: On Palestine and Gaza in Crisis.

“One of the most prominent Israeli political dissidents living in exile … He is also one of the few Israeli students of the conflict who write about the Palestinian side with real knowledge and empathy.”
—Avi Shlaim, Guardian

“Along with Edward Said, Ilan Pappe is the most eloquent writer of Palestinian history.”
—New Statesman

“Ten Myths About Israel is a useful primer for people just becoming familiar with the Palestinian liberation struggle—but it is far more than that. It is also a valuable tool for veteran organizers seeking to explain cogently and simply how Israel’s foundational myths and ongoing propaganda perpetuate the oppression of the Palestinian people.”
—Electronic Intifada

“This book is an absolute must for an interested public, the political and the media class to understand what Israel is all about.”
—American Herald Tribune