Removing the Stalin Stain: Marxism and the Working Class in the 21st Century (Paperback) 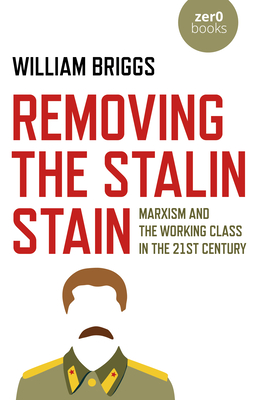 By William Briggs
$19.95
Email or call for price

'Briggs tackles head-on the zone of conflict that Marx never quite got to, though not for lack of ambition. How do nation-states both manage and contest the military-industrial surges of global capitalism? Arguing the novel thesis that Stalin did good work for capitalism, offering its defenders an open goal to score against Marxism, Removing the Stalin Stain presents a clearly argued and outward-facing Marxist analysis of contemporary politics.' Terrell Carver, Professor of Political Theory, University of Bristol, UKCan Marxism emerge from the long shadow cast by Stalinism, and challenge capitalism? There is undoubtedly a growing interest in Marxism and socialism. Opinion polls show a majority that regard socialism as a real option. It is against this reality, and as a contribution to growing debates, that this book has been written. Marxism, as an ideological force and instituted to lead the charge against capitalism, has been poorly served in the past century. Many of its core messages have been obscured. William Briggs gives a rousing defence of Marxism, calling for a return of the working class to the centre of potential struggle. Briggs seeks to heal the damage done to Marxism, in the name of Marxism, over generations past.

William Briggs is a political economist whose special areas of interest lies in Marxist political theory. He has been, variously, a teacher, journalist, and political activist. He lived and worked in Moscow during the last years of the Soviet Union. Decades later he completed a PhD that defended classical Marxist theory. He writes for the blogsite Pearls and Irritations and occasionally for the Hobart Mercury on International Politics. He lives in Melbourne, Australia, where he is affiliated to Deakin University.