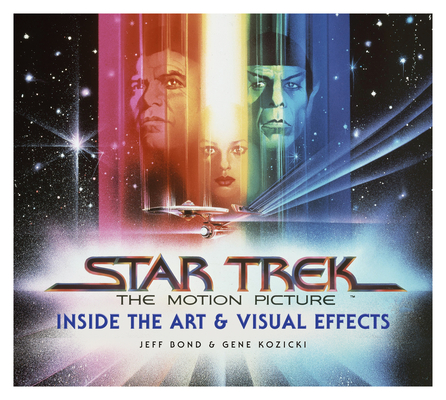 
Ships to Our Store in 1-5 Days
The official guide to the film artistry of Star Trek: The Motion Picture.

Forty years ago, Star Trek: The Motion Picture brought Kirk, Spock, and the Enterprise crew to the big screen and changed the course of the Star Trek franchise. Now, celebrate this landmark anniversary by discovering the visual artistry that made this an enduring science fiction classic. For the first time ever, explore archival material created by legendary Star Trek collaborators, including Robert Abel, Syd Mead, Ralph McQuarrie, Andrew Probert, and Ken Adams.
Jeff Bond is the author of Danse Macabre: 25 years of Danny Elfman and Tim Burton, and The Music of Star Trek. He was Executive Editor of Geek magazine and Senior Editor at CFQ, the revival of Cinefantastique magazine, from 2003 to 2006. He covers film music and other subjects for the Hollywood Reporter and has written hundreds of movie and television soundtrack liner notes booklets.
"Absolutely stunning' - StarTrek.com

“A feast for fans” - Comingsoon.net

“A much-needed look into the heart of Star Trek: The Motion Picture, at the real human adventure that brought the movie to life” - Trek Movie

“A veritable treasure trove of Trek lore and production information... providing a wondrous opportunity to reassess a first instalment all too often forgot” - Adventures in Poor Taste