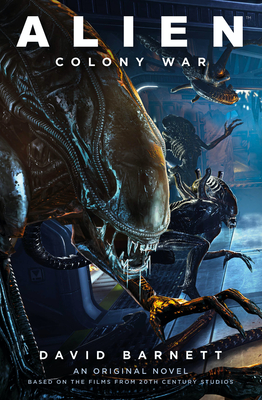 
Ships to Our Store in 1-5 Days
Political conflicts on Earth erupt into open hostilities between their colonies in space, with Xenomorphs as the ultimate weapon.

On Earth, political tensions boil over between the United Americas, Union of Progressive Peoples, and Three World Empire. Conflict spreads to the outer fringes, and the UK colony of New Albion breaks with the Three World empire. This could lead to a... Colony War.

Trapped in the middle are journalist Cher Hunt, scientist Chad McLaren, and the synthetic Davis. Seeking to discover who caused the death of her sister, Shy Hunt, Cher uncovers a far bigger story. McLaren's mission, fought alongside his wife Amanda Ripley, is to stop the militarization of the deadliest weapon of all—the Xenomorph.

Their trail leads to a drilling facility on LV-187. Someone or something has destroyed it, killing the personnel, and the British are blamed. Colonial forces arrive, combat erupts, then both groups are overwhelmed by an alien swarm. Their only hope may lie with the Royal Marines unit known as "God's Hammer."

Bonus Feature: An exclusive new game scenario based on the massively popular, award-winning Alien RPG from Free League Publishing!
David Barnett is a journalist and writer based in the UK. He writes features for a variety of outlets, including the Guardian, Independent, BBC and more. As an author, he never quite knows what to write, so writes everything. He has written the Gideon Smith Victorian fantasy trilogy, several commercial fiction novels including the international bestseller Calling Major Tom and, most recently, The Handover, published in the US in Summer 2022 as Same Time, Same Place. He also writes comic books, and his work includes Books of Magic for DC, Southside Serpents for Archie, Eve Stranger and Punks Not Dead for IDW, and several strips for 2000 A.D.