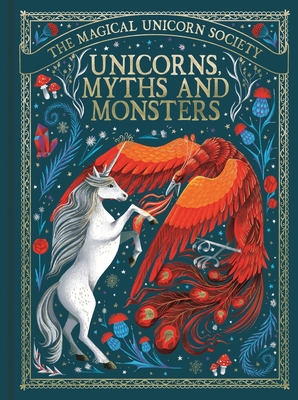 
Currently Unavailable
Straight from the Magical Unicorn Society's Department of Unicorns, Myths, and Monsters comes a lavishly illustrated collection of stories dedicated to the magical creatures – good and bad – that exist alongside unicorns.

The Magical Unicorn Society is opening its doors once again, to reveal eight brand new stories about the world’s most mysterious, magical, and elusive creatures. This time, the stories come from the MUS’s Department of Unicorns, Myths and Monsters, dedicated to the magical creatures – good and bad – that exist alongside unicorns. Introduced by department head and intrepid explorer, May Shaw, there are tales of fearsome, fire-breathing dragons, phoenixes rising from the ashes, mysterious kraken that lurk in the deep, imps, sprites, and werewolves in mythical forests, as well as the eight unicorn families and those who have encountered unicorns throughout history.

Each of the eight stories is accompanied by stunning, full-color artwork that shows the powers of the specific mythical creature in more detail, as well as an epic illustration of a key moment from the text. Perfect for fans of the previous bestselling titles in the series.

Perfect for:
• Fans of the previous bestselling titles
• Lovers of fantasy and mythical worlds
Anne Marie Ryan works as an editor and has written children’s fiction under a variety of pen names, including Bella Swift and Rosie Banks.
"Every page is beautifully designed, in full, vibrant color, with lovely illustrations that accompany the text. It is as inventive as it is thorough, categorizing unicorns into different families and presenting the wealth of information in various formats, including time lines and family trees. This book is sure to delight any curious child who adamantly wants to believe in unicorns and always has plenty of stories to share about them." ―Booklist on The Magical Unicorn Society Official Handbook