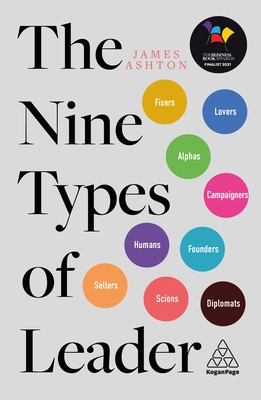 Where chief executives and company presidents lead, thousands follow. These elites make excruciatingly difficult calls on strategies which will affect jobs, drive corporate growth and investment and deliver shareholder returns. But their impact is far greater than merely numbers on a balance sheet. Their personalities dramatically set the tone of their organization. Do these people have anything in common? Do they share any similar behaviours and philosophies?

The Nine Types of Leader introduce some obvious and some not so obvious types of leader. From the alphas, the campaigners and the lovers, through to the fixers, the founders and the scions, via the sellers, the diplomats and moderns, this book introduces them through stories, anecdotes and insight garnered from hundreds of encounters with world-class leaders. Featuring interviews with industry titans including Jean-Francois Decaux of JC Decaux, Michael Rapino of Live Nation, Ana Botin of Santander, James Daunt of Barnes & Noble and Waterstones, Dame Moya Greene of the Royal Mail and Isabelle Kocher of Engie, it explores how the leaders of tomorrow will improve their game by borrowing from the very best of the nine types of leader that exists today.
James Ashton was city editor and executive editor at the London Evening Standard and Independent and before that city editor at The Sunday Times and chief city correspondent at the Daily Mail. During this period he covered some of the biggest economic and corporate stories of recent times. Today he regularly writes columns and interviews for several national newspapers including the daily and Sunday Telegraph and The Times on business, leadership, technology and investment. His podcast, 'Leading with James Ashton', features bosses from the worlds of business, charity, the arts and sport, swapping stories about how they learnt to lead.