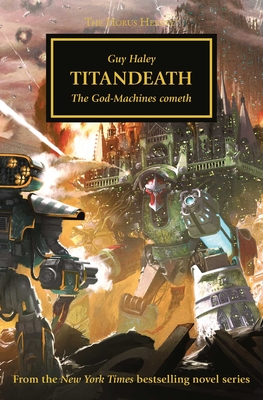 This is book number 53 in the The Horus Heresy series.

Book 53 in the bestselling series, The Horus Heresy.

Horus’s armada gathers, and he has defeated all enemies sent against him, even the Emperor’s own executioner. One barrier remains before he can strike for Terra and lay waste to the Emperor’s dream.

The Beta Garmon system occupies the most direct and only viable route to the Solar System and Terra. To break it, Horus assembles a war host of incredible proportions and Titans in untold numbers. To lose here is to lose the war and Horus has no intention of turning back. But the Imperium understands the importance of Beta Garmon too. A massive army is arrayed, comprised of near numberless Army cohorts and a mustering of Titans to challenge even the martial might of the Warmaster.

Titans fight against Titans as the God Machines of Loyalists and Traitors alike go to war. This conflict will be like no other before it, a worldending battle that will determine the next phase of the war.
Guy Haley is the author of the Siege of Terra novel The Lost and the Damned, as well as the Horus Heresy novels Titandeath, Wolfsbane and Pharos, and the Primarchs novels Konrad Curze: The Night Haunter, Corax: Lord of Shadows and Perturabo: The Hammer of Olympia. He has also written many Warhammer 40,000 novels, including Belisarius Cawl: The Great Work, Dark Imperium, Dark Imperium: Plague War, The Devastation of Baal, Dante, Darkness in the Blood, Baneblade and Shadowsword. His enthusiasm for all things greenskin has also led him to pen the eponymous Warhammer novel Skarsnik, as well as the End Times novel The Rise of the Horned Rat. He has also written stories set in the Age of Sigmar, included in War Storm, Ghal Maraz and Call of Archaon. He lives in Yorkshire with his wife and son.