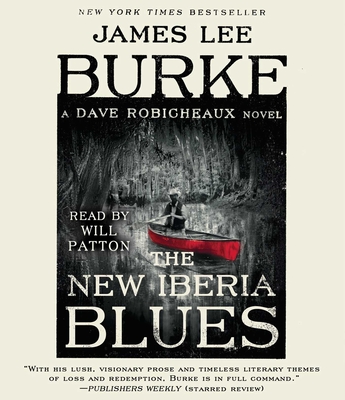 By James Lee Burke, Will Patton (Read by)

The shocking death of a young woman leads Detective Dave Robicheaux into the dark corners of Hollywood, the mafia, and the backwoods of Louisiana in this New York Times bestselling mystery from “modern master” (Publishers Weekly) James Lee Burke.

Twenty-five years later, when Robicheaux knocks on Cormier’s door, it isn’t to congratulate him on his Golden Globe and Academy Award nominations. Robicheaux has discovered the body of a young woman who’s been crucified, wearing only a small chain on her ankle. She disappeared near Cormier’s Cyrpemort Point estate, and Robicheaux, along with young deputy, Sean McClain, is looking for answers. Neither Cormier nor his enigmatic actor friend Antoine Butterworth are saying much, but Robicheaux knows better.

As always, Clete Purcel and Davie’s daughter, Alafair, have Robicheaux’s back. Clete witnesses the escape of Texas inmate, Hugo Tillinger, who may hold the key to Robicheaux’s case. As they wade further into the investigation, they end up in the crosshairs of the mob, the deranged Chester Wimple, and the dark ghosts Robicheaux has been running from for years. Ultimately, it’s up to Robicheaux to stop them all, but he’ll have to summon a light he’s never seen or felt to save himself, and those he loves.

Stephen King hailed New York Times bestselling author James Lee Burke “as good as he ever was.” With The New Iberia Blues, Burke proves that he “just keeps getting better” (Booklist, starred review), and is “one of a small handful of elite suspense writers whose work transcends the genre, making the leap into capital-L Literature” (BookPage).
James Lee Burke is a New York Times bestselling author, two-time winner of the Edgar Award, and the recipient of the Guggenheim Fellowship for Creative Arts in Fiction. He has authored forty novels and two short story collections. He lives in Missoula, Montana.

Will Patton’s film credits include Halloween, Boarding School, Megan Leavey, American Honey, Meek’s Cutoff, A Mighty Heart, Remember the Titans, The Mothman Prophecies, Armageddon, and No Way Out. He starred in Swamp Thing on the DC Universe streaming platform and was seen in five seasons of the TNT series Falling Skies. He has won Obie Awards for his performances in Fool for Love and What Did He See? He is also known for his audiobook recordings of the work of Stephen King, James Lee Burke, Denis Johnson, and William Faulkner.