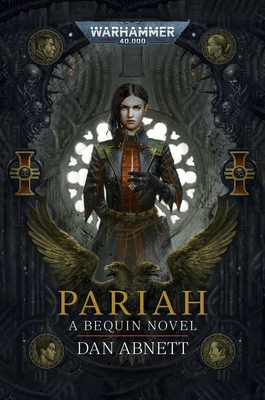 
Currently Unavailable
Stunning re-release of the first book in the Bequin series!

In the city of Queen Mab, nothing is quite as it seems. Pariah, spy and Inquisitorial agent, Alizebeth Bequin is all of these things and yet none of them. An enigma, even to herself, she is caught between Inquisitors Gregor Eisenhorn and Gideon Ravenor, former allies now enemies who are playing a shadow game against a mysterious and deadly foe. Coveted by the Archenemy, pursued by the Inquisition, Bequin becomes embroiled in a dark plot of which she knows not her role or purpose. Helped by a disparate group of allies, she must unravel the secrets of her life and past if she is to survive a coming battle in which the line between friends and foes is fatally blurred.

Dan Abnett has written over fifty novels, including Anarch, the latest instalment in the acclaimed Gaunt’s Ghosts series. He has also written the Ravenor and Eisenhorn books, the most recent of which is The Magos. For the Horus Heresy, he is the author of Horus Rising, Legion, The Unremembered Empire, Know No Fear and Prospero Burns, the last two of which were both New York Times bestsellers. He also scripted Macragge’s Honour, the first Horus Heresy graphic novel, as well as numerous Black Library audio dramas. Many of his short stories have been collected into the volume Lord of the Dark Millennium. He lives and works in Maidstone, Kent.