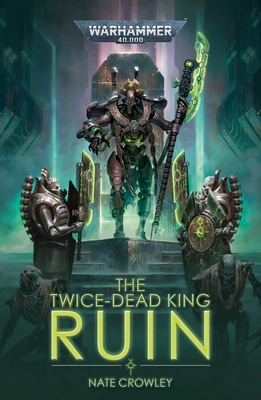 
Ships to Our Store in 1-5 Days
Peer into the into the bizarre culture and motivations of the Necrons in this great novel from Nate Crowley.

Exiled to the miserable world of Sedh, the disgraced necron lord Oltyx is consumed with bitterness. Once heir to the throne of a dynasty, he now commands nothing but a dwindling garrison of warriors, in a never-ending struggle against ork invaders. Oltyx can think of nothing but the prospect of vengeance against his betrayers, and the reclamation of his birthright. But the orks are merely the harbingers of a truly unstoppable force. Unless Oltyx acts to save his dynasty, revenge will win him only ashes. And so he must return to the crownworld, and to the heart of the very court which cast him out. But what awaits there is a horror more profound than any invader, whose roots are tangled with the dark origins of the necrons themselves.

Nate Crowley is an SFF author and games journalist who lives in Walsall with his wife, daughter, and a cat he insists on calling Turkey Boy. He loves going to the zoo, playing needlessly complicated strategy games, and cooking incredible stews. Severed is his third story for Black Library, the others being ‘Empra’ and 'The Enemy of My Enemy'.