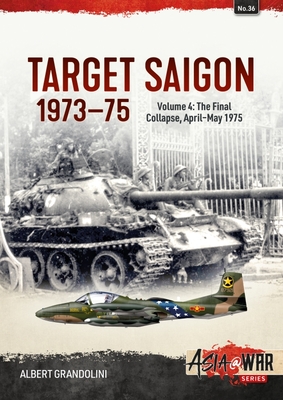 After two protracted years of fighting that wearied down the Army of the Republic of Vietnam (ARVN), the North Vietnamese decided to launch their final campaign in January 1975. The president of South Vietnam, Nguyen Van Thieu, decided upon a wide range of strategic withdrawals to consolidate his forces, that saw the northern half of the country abandoned to the enemy. The scheme turned into a disaster, and by March 1975 the whole North Vietnamese regular battle corps, some 550,000 troops and 700 tanks, were now amassing at the gates of South Vietnam's capital and the following fighting led to some of the fiercest fighting of the Vietnam War.

The final volume of Target Saigon examines the final campaigns of the conflict in Vietnam, in which the Communist forces engaged in a highly mechanized war of maneuver. Despite being heavily outnumbered, many of the ARVN's units put up a fierce resistance, inflicting heavy casualties upon the advancing Northern forces, in a series of battles that were far from the rout often described.

Target Saigon Volume 4 is illustrated with a number of maps, 130 photographs and over 30 original color artworks illustrating the men, vehicles and aircraft of this campaign.