The Forty-Year War in Afghanistan: A Chronicle Foretold (Paperback) 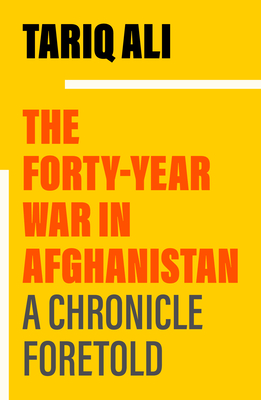 The Forty-Year War in Afghanistan: A Chronicle Foretold (Paperback)

The occupation of Afghanistan is over, and a balance sheet can be drawn. These essays on war and peace in the region reveal Tariq Ali at his sharpest and most prescient.

Rarely has there been such an enthusiastic display of international unity as that which greeted the invasion of Afghanistan in 2001. Compared to Iraq, Afghanistan became the “good war.” But a stalemate ensued, and the Taliban waited out the NATO contingents. Today, with the collapse of the puppet regime in Kabul, what does the future hold for a traumatised Afghan people? Will China become the dominant influence in the country?

Tariq Ali has been following the wars in Afghanistan for forty years. He opposed Soviet military interven- tion in 1979, predicting disaster. He was also a fierce critic of its NATO sequel, Operation Enduring Freedom. In a series of trenchant commentaries, he has described the tragedies inflicted on Afghanistan, as well as the semi-Talibanisation and militarisation of neighbouring Pakistan. Most of his predictions have proved accurate. The Forty-Year War in Afghanistan: A Chronicle Foretold brings together the best of his writings and includes a new introduction.

Tariq Ali has written more than two-dozen books on world history and politics — the most recent of which are The Clash of Fundamentalisms, The Obama Syndrome and The Extreme Centre — as well as the novels of his Islam Quintet and scripts for the stage and screen. He is a long-standing member of the editorial committee of New Left Review and lives in London.
“Ali’s discussion of Afghanistan is highly valuable because of the questions it raises … a starting point for a much-needed debate.”
—New York Times

“Evergreen … Ali has argued against each occupation from its beginning; the result is an embittered, haunting refrain.”
—Eileen Gonzalez, Foreword Reviews

“A key contribution to make sense of the decades-long events that culminated in the chaotic scenes at Kabul’s airport in August 2021.”
—Marc Martorell Junyent, Inside Arabia

“No one, Left or Right, has followed the misadventure of US policy in Afghanistan with such dogged attention and keen insight.”
—Paul Buhle, Counterpunch

“Erudite and committed … This collection is indispensable for forming an understanding of what has happened and why.”
—Andrew Murray, Morning Star

“Unlike pro-interventionist liberal and even conservative interpretations of Afghanistan’s recent history, Ali’s anti-imperialist understanding provides the glue that binds the bloody tale together.”
—Ron Jacobs, Counterpunch

“Brilliant and incisive … a must-read for anyone who wants to understand the causes and consequences of the decades-long turmoil in Afghanistan.”
—N.P. Ullekh, Open the Magazine

“Witty, insightful, and full of detail … a book replete with encounters and anecdotes, evocative descriptions, and a brutal honesty about the corrupting power of war.”
—Terina Hine, Counterfire