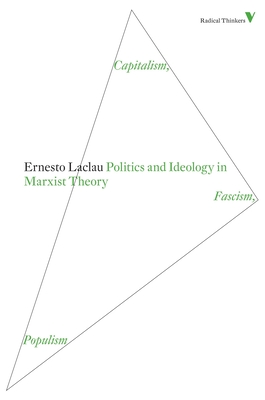 Ernesto Laclau is best known for co-authoring Hegemony and Socialist Strategy, with Chantal Mouffe. Politically active in the social and student movements of the 1960s, and a member of PSIN (Socialist Party of the National Left), Laclau’s oeuvre links the working class and new social movements. Rejecting Marxist economic determinism and the notion of class struggle, Laclau instead urged for a radical democracy where antagonisms could be expressed. Frequently described as post-Marxist, Laclau’s writings have focused on political movements. Politics and Ideology in Marxist Theory was Laclau’s first published work, where readers can trace the early formation of ideas that shaped the twentieth century.

Ernesto Laclau is Professor of Political Theory in the Department of Government, University of Essex, and Distinguished Professor for Humanities and Rhetorical Studies at Northwestern University. He is the author of, amongst other works, Hegemony and Socialist Strategy (with Chantal Mouffe), New Reflections of the Revolution of Our Time, The Populist Reason, Contingency, Hegemony, Universality (with Judith Butler and Slavoj Zizek), and Emancipation(s).