The Method of Freedom: An Errico Malatesta Reader (Paperback) 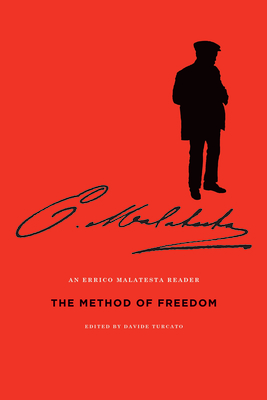 For sixty years, Errico Malatesta's involvement with international anarchism helped fuel the movement's radical approach to class and labor, and directly impacted the workers' movement in Italy. A talented newspaper journalist, Malatesta's biting critiques were frequently short and to the point--and written directly to and for the workers. Though his few long-form essays, including Anarchy and Our Program, have been widely available in English translation since the 1950s, the bulk of Malatesta's most revolutionary writing remains unknown to English-speaking audiences.

In The Method of Freedom, editor Davide Turcato presents an expansive collection of Malatesta's work, including new translations of existing works and a wealth of shorter essays translated here for the first time. Offering readers a thorough overview of the evolution of Malatesta's revolutionary thought during his half a century as an anarchist propagandist, The Method of Freedom explores revolutionary violence and workplace democracy, the general strike and the limitations of trade unionism, propaganda by the deed, and the revolution in practice.

Errico Malatesta Errico Malatesta (1853-1932) was an enormously influential Italian anarchist, comrade of Michael Bakunin in the First International, editor of eight newspapers, and author of numerous articles and short works.

Davide Turcato is a computational linguist and an independent historian. He is the author of Making Sense of Anarchism and the editor of Malatesta's collected works, a ten-volume project currently underway in Italy, to be released in English by AK Press.

Errico Malatesta: Errico Malatesta (1853-1932) was an enormously popular Italian anarchist, perhaps most well-known for his strong support of direct action and the general strike. A talented newspaper journalist and editor, Malatesta spent much of his life exiled from Italy because of his political beliefs. Davide Turcato: Davide Turcato is a computational linguist with an interest in history. He is the author of Making Sense of Anarchism, and the editor of Malatesta's collected work, a ten-volume project currently underway in Italy, to be released in English by AK Press.