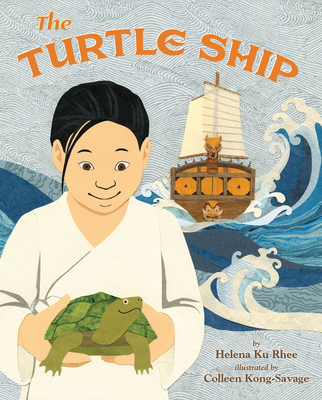 A young Korean boy named Sun-sin designs one of the greatest battleships in history and fulfills his dream of sailing the world.

Long ago in Korea, a young boy named Sun-sin spent his days playing with his pet turtle Gobugi and dreaming of sailing around the world. As a poor villager, though, his dream to travel seemed impossible. Then one day, the king's court announced a contest to find the best design for a new battleship to defend the land from invaders. The winner would sail the ocean with the royal navy.

Determined to win, Sun-sin attempts to build an indestructible battleship with a few found items. Each attempt fails miserably against the powerful sea, and with it Sun-sin's dream also sinks to the bottom. Turning to Gobugi for comfort, Sun-sin notices how his pet turtle is small but mighty, slow but steady, and impossible to sink. Suddenly, Sun-sin has a great idea.

Loosely based on the true story of Admiral Yi Sun-sin and his Turtle Ship, this delightful tale by debut author Helena Ku Rhee and debut illustrator Colleen Kong-Savage introduce young readers to a fascinating episode in Korean history and naval engineering.

HELENA KU RHEE works at a movie studio by day and is a children's book writer by night. Born in South Korea, she grew up listening to mighty tales of the Turtle Ship and Admiral Yi Sunsin from her parents and grandparents. Helena loves the idea that since nobody is 100% certain about the origins of the Turtle Ship design, it could very well have been a small, quiet turtle who inspired the creation of one of the greatest battleships of all time. This is her picture book debut. She lives in Los Angeles, California, and you can find her online at helenakrhee.com. COLLEEN KONG-SAVAGE is a full-time illustrator and graphic designer. When she first moved to New York City, Kong-Savage worked at an art supply store, where she spent half her paycheck on decorative papers. For this debut picture book, she spent countless hours researching the clothes, living conditions, and landscape of the Joseon Dynasty, and then finding the right paper for each item. The papers used in this book come from around the world, including Korea where traditional paper is handmade from mulberry bark. Kong-Savage lives in New York City. You can visit her online at kongsavage.com.