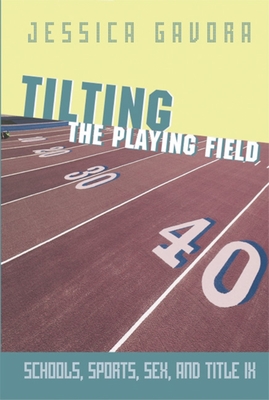 
Ships to Our Store in 1-5 Days
When Congress passed Title IX of the Civil Rights Act in 1972, they seemed to be doing something laudable and also long overdue-prohibiting discrimination on the basis of sex in America's schools. But thirty years later, a law designed to guarantee equal opportunity has become the most explicit, government-enforced quota regime in America, putting boys and men on the losing side of a battle for athletic and educational opportunity. A former athlete herself, Jessica Gavora interviewed dozens of leading college athletes, educators and legal experts for this provocative, yet carefully researched book. She argues that the 1999 World Cup victory of the U.S. Women's Soccer team, for instance, widely seen as a Title IX triumph, was actually the result of a far more profound social revolution that has changed America's mind about sexual roles and female destiny. If anything, Title IX has had a destructive overall effect on all college athletes by killing opportunities to compete. Gavora shows how Title IX sports quotas have caused chaos at schools like Brown University and led directly to the cancellation of some of the most prestigious men's programs in the country-among them Providence College's baseball team, Princeton's wrestling team and the men's swimming and diving program that produced several Olympic champions. But if Title IX has tilted the college playing field, Gavora suggests that its greatest impact on American social life may still lie ahead as the federal bureaucrats, activist judges, and radical feminists who have shaped the statute's interpretation now seek to expand its reach into sexual harassment and other areas of education where boys and girls have to conform to their notion of gender equity. Tilting the Playing Field is a trenchant insider's look at how one law-and its unintended consequences--has affected our view of sports, sex, and schools.