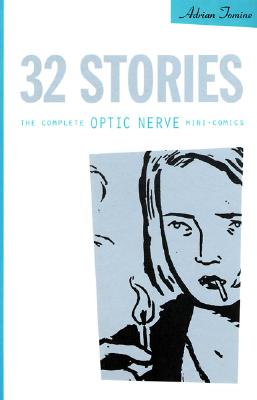 
Call or email for availability
In 1991, Adrian Tomine self-published the first issue of "Optic Nerve." Consisting of three xeroxed sheets of paper, and with a print run of twenty-five, it was a less-than-auspicious, largely unnoticed debut. In the following three years, though, Optic Nerve developed at a startlingly rapid pace: the artwork and writing evolved with each story, production quality improved, page counts increased, and by issue seven, sales had reached 6,000. In 1994, Drawn & Quarterly took over the publishing duties of "Optic Nerve," and the original seven issues sold out and were left out of print. 32 stories presents these rare, early editions, collected for the first time in a single volume.
Adrian Tomine was born May 31st, 1974 in Sacramento, California. His uneventful childhood was spent in various small towns along the West Coast. He currently resides in Berkeley, where he studies English at the University of California and continues to write and draw Optic Nerve.