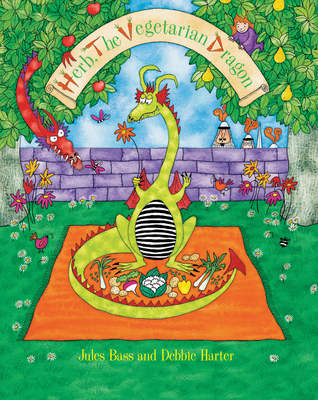 
Ships to Our Store in 1-5 Days
All the dragons in the forest of Nogard like nothing better than raiding Castle Dark and carrying off princesses to eat - all the dragons, that is, except one. Herb is at his happiest tending his vegetable patch, for Herb is a vegetarian. So it is unfortunate that he is the one captured by the castle's knights in armor. Treacherous Meathook and his dragon cronies will only help Herb if he agrees to eat meat - will he give in to their blackmail. Jules Bass's lighthearted story combines with Debbie Harter's jaunty illustrations to make this a hilarious picture book that also offers young readers plenty of food for thought.
Jules Bass is the 'Bass' in Rankin/Bass Animated Entertainment, New York, producers of such films as The Hobbit, The Last Unicorn, and The Little Drummer Boy. He has worked as a writer, songwriter, producer and director in many feature films, off-Broadway productions and audio recordings. Jules lives in New York, USA and is a frequent visitor to London.Debbie Harter has illustrated over 20 books for Barefoot, including the beloved Bear series. As a child, Debbie would lose herself in books (as long as they had pictures) and hopes to continue doing so until she's very old. She lives in Cornwall, England.