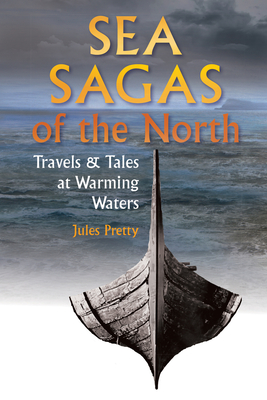 Sea Sagas of the North interweaves prose chapters and alliterative sagas. Each chapter tells of travels across shores, seas and islands. This is the territory of sagas, the Norse and Anglo-Saxon gods of old, and the mythic era of Viking expansion by clinkered longships. It was when dragons protected people from themselves by hiding gold and silver hoards.

There are shadows on the warming, northern seas. Long ago, refugees fled Doggerland when seas encroached. Now rising seas threaten the low-lying shores once again.

Jules Pretty tells moving stories from Iceland, Norway’s Lofoten islands, Denmark, eastern England, Lindisfarne, Shetland, St Kilda and the Faroes. His touching tales weave a rich cultural tapestry from sagas, the heroic cliff rescues of deep-water fishermen by Icelanders, how Vikings and sheep left so few trees, the miraculous escape of Danish Jews to Sweden from Denmark in 1943, the rise of Abbess Hildr of Whitby, the enslaved Grimsby orphan boys and life on Doggerland itself. He asks how can we live wisely and well with nature and each other as the fire and flood of Ragnarok looms.

Jules Pretty OBE is Professor of Environment and Society and Director of Centre for Public and Policy Engagement, University of Essex. He is both a scientist and storyteller. His books include The East Country (2017), The Edge of Extinction (2014), This Luminous Coast (2011, 2014), The Earth Only Endures (2007), Agri-Culture (2002) and Regenerating Agriculture (1995).
"Wonderfulwords;youspeak them out loud while silently reading. Such a bold and wide-sweeping work." —Julia Blackburn, author ofTime Song: Searching for Doggerland

"These sagas bring the drama, emotions and practices of the sea-faring world into contemporary relevance without losing the power of past story-telling and lived experiences. Marvellous story-telling and use of language, all sorts of new colours and emotional depths." —Patricia Gillies, Longman Anthology of Old English, Old Icelandic and Anglo-Norman Literatures

"Vivid accounts of the interactions of human culture and nature covering the sweep of history in the North Atlantic. The sagas illustrate both the limits and the possibilities of human actions, given the forces of climate change." —Professor Tom Dobbs, South Dakota State University

"These sagas that are both epic and timeless, and a lyrical evocation of the communities whose lives and livelihoods are bound up with the sea. These are stories of people who have understood our dependence on the riches of the natural world. Stirring and salutary, a beautiful and moving read." —Tanya Steele, Chief Executive World Wildlife Fund-UK