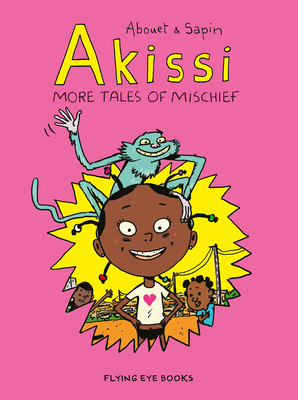 
Ships to Our Store in 1-5 Days
The plucky, troublemaking Akissi is back with her mischief on The Ivory Coast! This time, she has to keep herself from drowning, stand up to a bully, make peace with her arch nemesis--the prettiest girl in school, and evade a witch doctor's potion.

Inspired by her childhood on The Ivory Coast, writer Marguerite Abouet takes readers on even more hilarious adventure in Akissi: Volume 2. Lessons learned along the way include being friends with people you don't like, standing up for yourself, and dealing with the consequences of your actions.

The high spirited and mischievous Akissi returns for more "girls will be girls" adventures on the Ivory Coast in these previously untranslated stories.
Marguerite Abouet is a renowned writer from Abidjan on the Ivory Coast in West Africa. She is the author of the tremendously successful comic, Aya of Yop City, as well as the Akissi series for children.

“The autobiographical element from Abouet is also crucial in that it offers a genuine quality to the stories, and having lived the life allows them to forgo any sentimentality. Instead Abouet imbues the stories with a sense of adventure that should speak loudly to so many American children reading it, possibly facing a cloistered, overbooked day-to-day existence. Akissi’s life must be a dream come true.”
—John Seven, The Beat