On Dogs: An Anthology (Hardcover) 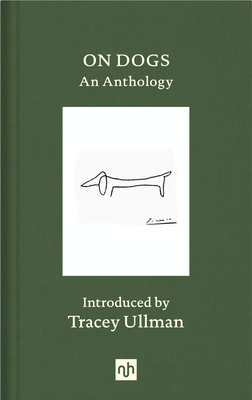 On Dogs: An Anthology (Hardcover)

By Tracey Ullman (Introduction by)


Available at One of Our Locations
Calling all dog-lovers: On Dogs collects essays about man's best friend by Charles Dickens, Vita Sackville-West, Brigitte Bardot, and Shakespeare, among others, with an introduction by acclaimed actor, comedian, and adopter of strays Tracey Ullman.

Dogs throughout history have enjoyed a special relationship with humankind, and our favorite four-legged creatures continue to grow in popularity. The writers and poets collected within this anthology reflect on the joys and pitfalls of dog ownership with brilliant wit, insight, and affection. With a heartfelt and humorous introduction by Tracey Ullman (an inveterate adopter of strays), this illustrated anthology traces the canine’s extraordinary journey from working animal to pampered pet. Features six black-and-white dog photographs by acclaimed reportage and portrait photographer Rhian Ap Gruffydd (Gruffpawtraits).
Tracey Ullman is an internationally acclaimed producer, writer, actor and dog lover. She is perhaps best known for her series "The Tracey Ullman Show," which established her as a major comic talent. Ullman has received many industry honors including seven Emmys, a Golden Globe, and a BAFTA. Her most recent show "Tracey Breaks the News" met with acclaimed success. Her current dog is a mixed breed terrier named Oscar.
"The infectious joy of dogs figures large in On Dogs: An Anthology, introduced by the actor and comedian Tracey Ullman. Although she is a devoted dog-lover…the selections in the anthology are not all feel-good. S everal are dark or poignant pieces on a dog’s death; others offer sour or sardonic comments on pet dogs. The collection is an eclectic mixture drawn from fiction, poems, anecdotes, and scientific or philosophical essays….It is… an enjoyable collection in which many aspects of our complex relationship with dogs are touched on.” — David E. Cooper, The TLS

“This heartwarming compendium includes short essays, stories, reflections and poetry from note- worthy writers ranging from Virginia Woolf and David Sedaris to Shakespeare and Brigitte Bardot. A linen-bound hardcover sized to fit perfectly in the hand, it’s ideal for gift-giving.”  — The Bark

“Introduced by Tracey Ullman, this elegant, pocketsize tribute to our most loyal friends is realised in excerpts from novels, poems and literary theory.” — Louise Darblay,  Art Review