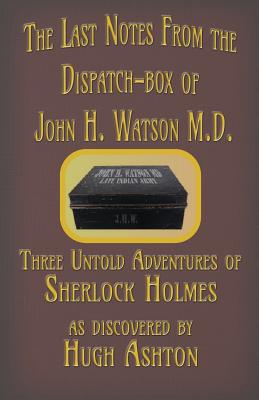 The first of these, "The Case of the Russian Bear", involves the British Government, as represented by Mycroft Holmes. The circumstances surrounding it are mentioned in "The Disappearance of Lady Frances Carfax", where Holmes mentions to Watson that it would be impossible for him to leave London while "old Abrahams" is in such danger. We are not told any more about Abrahams in the Canon, but he may be identified as Sir David Abrahams, who makes his appearance in "The Enfield Rope".
In it, we see Holmes' varied interests, including Kaballah, and some knowledge of the anarchist and revolutionary movements in Russia at the end of the 19th century (the last no doubt at least as the result of his work for Mycroft).
There can be little doubt in my mind that Watson witheld publication of this adventure on account of its political sensitivity.

The second adventure recorded here, "The Hand of Glory", is a purely domestic adventure, taking place as it does in a small unnamed Warwickshire market town, which it is impossible to identify from the sketchy description here.
Holmes' knowledge of the esoteric superstitions of the past stands him in good stead here, and leads him to a satisfactory elimination of a criminal conspiracy, set up and masterminded for reasons of personal revenge.
The grisly elements in this story are beyond anything described elsewhere by Watson, surpassing even "The Cardboard Box" and "Black Peter" in their gruesome nature. It seems to me that this would form a reason for this adventure to remain unpublished by Watson.

Lastly, we turn to the "Disappearing Spoon" ; a light-hearted look at a very minor incident in which Holmes renders assistance to a former schoolfellow. Disappointingly, though, we are not informed which school he attended (my personal belief is that Holmes was educated at Stonyhurst College, but there is no way of verifying or disproving this from the material available here).