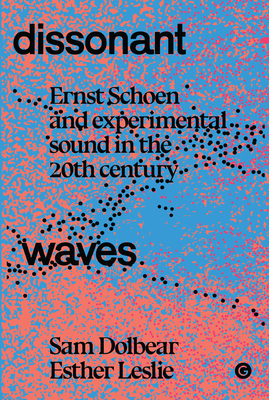 
Coming Soon - Available for Preorder Now
An investigation of the cultures and technologies of early radio and how a generation of cultural operators—with Schoen at the center—addressed crisis and adversity.

Dials, knobs, microphones, clocks; heads, hands, breath, voices. Ernst Schoen joined Frankfurt Radio in the 1920s as programmer and accelerated the potentials of this collision of bodies and technologies. As with others of his generation, Schoen experienced crisis after crisis, from the violence of war, the suicide of friends, economic collapse, and a brief episode of permitted experimentalism under the Weimar Republic for those who would foster aesthetic, technical, and political revolution. The counterreaction was Nazism—and Schoen and his milieux fell victim to it, found ways out of it, or hit against it with all their might.

Dissonant Waves tracks the life of Ernst Schoen—poet, composer, radio programmer, theorist, and best friend of Walter Benjamin from childhood—as he moves between Frankfurt, Berlin, Paris, and London. It casts radio history and practice into concrete spaces, into networks of friends and institutions, into political exigencies and domestic plights, and into broader aesthetic discussions of the politicization of art and the aestheticization of politics. Through friendship and comradeship, a position in state-backed radio, imprisonment, exile, networking in a new country, re-emigration, ill-treatment, neglect, Schoen suffers the century and articulates its broken promises.

An exploration of the ripples of radio waves, the circuits of experimentation and friendship, and the proposals that half-found a route into the world—and might yet spark political-technical experimentation.
Sam Dolbear is the cofounder of the sound and radio collective MayDay Radio. He took up a fellowship at the ICI-Berlin as part of the 2020–2022 Project Reductions and continues working on a number projects, on palmist and sexologist Charlotte Wolff, a diagram of friendship constructed by Walter Benjamin, and a translation of Dora Kellner’s feminist sci-fi novel Gas gegen Gas.

Esther Leslie is Professor in Political Aesthetics, Birkbeck, University of London. She is frequently invited to speak in the UK, Europe, the US, and occasionally Australia, China, and India.