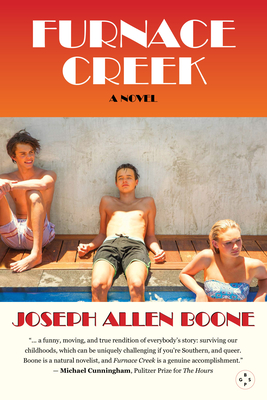 By Joseph Allen Boone
$26.99
Email or call for price

Fiction. California Interest. Part coming-of-age story and part novel of erotic discovery, part a queer take on Southern Gothic and part a detection-mystery thriller: FURNACE CREEK teases us with the question of what Charles Dickens' Pip might have been like had he grown up in the American South of the 1960s and 1970s and faced the explosive social issues-racial injustice, a war abroad, women's and gay rights, class struggle-that galvanized the world in those decades. Like Dickens's Pip, Newt Seward yearns to escape his small-town upbringing in the mountains of Virginia. A guilty encounter with an escaped felon, a summer spent working for an eccentric old bachelor with a mysterious past, conflicted erotic feelings for his employer's worldly visiting niece and nephew--these events set the stage for a surprising announcement that launches the youth on a journey of sexual and moral discovery, one that takes him to prep school in New England, bohemian digs in Rome, and discovery in Paris--all before he returns home to life's many expectations and disappointments. This inventive response to Great Expectations quickly leaps beyond the frame of Dickens' masterpiece to become a gripping contemporary meditation on the perils of desire, ambition, love, loss, and family.

Stretching from the American South to the Ivy League and the dream of Rome and Paris, FURNACE CREEK is a sweeping, Gothic tale of sex, race, and a young man's education. I was totally entertained and, most of all, seduced.--Viet Nguyen

Joseph Boone has written a page-turning novel, a spirited American retelling of an English classic. The American South is our own Dickensian England, and Boone brings both worlds vividly alive with his ebullient prose. A joyously ambitious debut - Marianne Wiggins, Pulitzer Prize and National Book Award nominee for Evidence of Things Unseen, Joe Boone's FURNACE CREEK is a funny, moving, and true rendition of everybody's story: surviving our childhoods, which can be uniquely challenging if you're Southern, and queer. Boone is a natural novelist, and FURNACE CREEK is a genuine accomplishment.--Michael Cunningham.