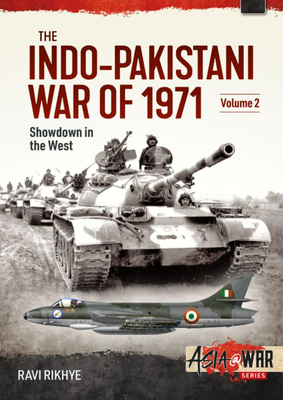 
Coming Soon - Available for Preorder Now
In 1947, India and Pakistan were partitioned by their former colonial ruler, Great Britain. A job that should have taken ten-years was done in a few months. Britain, drained by two world wars in 40-years no longer had the will or the money to guide the subcontinent to a peaceful partition by consensus. More importantly, the subcontinent was impatient for Britain's departure. The British left in haste, leaving unresolved the issue of Kashmir. This triggered a number of wars between the new states: 1947-48, 1965, 1971 and a continuing insurgency/counterinsurgency that began in 1987. Two other potential wars were narrowly averted in 1987-88 and 2001-02, and a further limited war was fought in 1999. Since the basic issue remains unresolved, the next war may be only a matter of time.

Late in the afternoon of 3 December 1971, in an attempt to distract New Delhi from developments in its eastern wing, Pakistan initiated hostilities with India by flying a series of air strikes against the forward air bases of the Indian Air force. Thus began the 'official' part of the India-Pakistan War of 1971, a bitter conventional war of the highest intensity in the history of the two countries since their independence. During the following weeks, a series of pitched battles took place as the two parties began exchanging blows almost everywhere along their 2,000-kilometre long mutual borders. By 16 December, and rather suddenly, the conflict was over: once East Pakistan had been overrun by India, Islamabad had no incentive to continue fighting a war it could not possibly win.

Through the extensive use of official records and participant recollections, rare photography and authentic color profiles, Ravi Rikhye tells the captivating story of the biggest military conflict fought between India and Pakistan to date, and the war that resulted in the emergence of Bangladesh as an independent nation.