The Danish Army of the Napoleonic Wars 1801-1815. Organisation, Uniforms & Equipment: Volume 3 - Norwegian Troops and Militia (From Reason to Revolution) (Paperback) 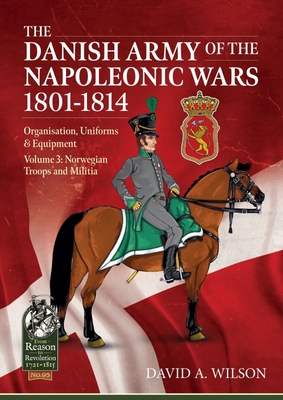 The Danish Army of the Napoleonic Wars 1801-1815. Organisation, Uniforms & Equipment: Volume 3 - Norwegian Troops and Militia (From Reason to Revolution) (Paperback)

By David A. Wilson


Currently Unavailable
This book was written to provide an in-depth study of the Danish and Norwegian armies of the Napoleonic Wars. The goal was to provide a working document which is as accurate as possible, covering the uniforms of these armies, their weapons and their evolution as well as their colors and a look at their basic tactics. Although this is principally a uniform book, historical background is also provided to place the details in their context. Most of the information contained in this volume is published in the English language for the first time.

This third volume looks in depth principally at the Norwegian Army including the regular infantry, cavalry, including their Colours, Guidons and Standards and field artillery covering all aspects of their organization, uniforms, arms and equipment as well as their J gers, light infantry and ski troops. The specifically Norwegian cannon and limbers are also covered.
Another subject covered by this volume is the numerous Norwegian and Danish volunteer and militias companies, some of whom were actively engaged on the field of battle. An in depth study of the Island of Bornholm is also included. This volume is illustrated with 62 original full color plates.

Unlike the few other works in English this book has been conducted with the assistance of respected Norwegian historians, as well as Danish and German historians.