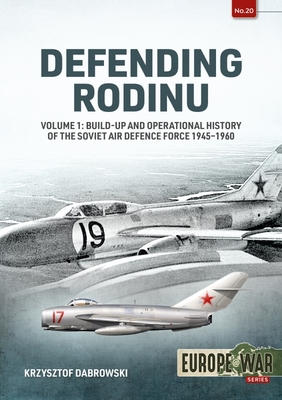 
Ships to Our Store in 1-5 Days
When the Second World War ended in 1945 the Soviets had numerous conventional anti-aircraft guns and piston engine fighters in service but with the rapid advances of aviation technology much of this was facing obsolescence. Worse, the war-ravaged country was facing new challenges as the end of the war did not bring a time of universal peace but instead a new rivalry with the West in a Cold War, which could at any time turn hot both figuratively and literally. Western competitors for world domination, primarily the United States, could boast a huge bomber fleet capable of delivering devastating nuclear strikes. Developing and fielding technologically and qualitatively new ground-based defenses and fighter aircraft became a most urgent imperative and in a relatively short time remarkable progress was achieved in these fields. Guided surface-to-air missiles were developed and fielded, and jet powered fighters entered service, their performance ever improving from high-subsonic to supersonic speeds. Similar advances were made in the fields of air-to air armaments and detection and early warning technology.

While nuclear-armed Western bombers never appeared in the skies over the Soviet Union numerous foreign reconnaissance aircraft did. Thus, the Soviet air defense arsenal was tested many times in actual combat against actual and perceived violators of their airspace and other challengers, in which the Soviet air defenses experienced both embarrassing defeats and exhilarating victories. Relegated to dusty files, the story of Soviet air defenses in arguably the hottest period of direct US-Soviet Cold War confrontation.

Volume 1 of Defending Rodinu examines the development of the Soviet air defense forces from the immediate aftermath of the Second World War up until 1960. It looks at the development of dedicated interceptor aircraft, surface-to-air missiles and the radar network needed to support these, along with a detailed history of the attempts, successful and otherwise, to intercept and destroy Western aerial intruders.