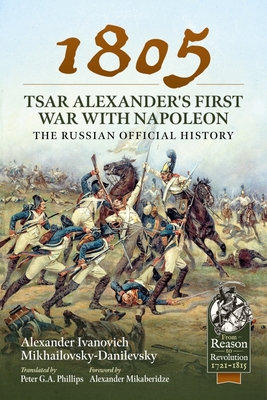 
Currently Unavailable
The official history of the first war between Tsar Alexander I and Napoleon in 1805, using original military and diplomatic documents and the testimonies of witnesses and participants from the war.

First published in 1844, the history describes the causes of the war and the state of the opposing armies before tracking the march of Kutusov's corps into Austrian territory and the concurrent Austrian disaster at Ulm. It then looks at the Tsar's diplomatic efforts: Emperor Alexander's journey abroad; Prussia's changing relationship with Napoleon; the Treaty of Potsdam; and the Tsar's relations with Britain and Sweden. Returning to the Danube theater the history covers: Kutuzov's retreat from Braunau to Krems, the actions at Lambach and Amstetten, the Battles of Krems and D rnstein; Kutuzov's march from Braunau to Znaim; Bagration's march to Hollabrun; and the action at Sch ngrabern.

The narrative of the primary theater of war concludes with the arrival of Essen's corps, the Tsar's return to Russia, the Peace of Pressburg, and the march of the Russians through Hungary and Galicia. However, details are also included of subsidiary operations in Hanover under Tolstoy in conjunction with the British and Swedes, and in the Mediterranean under Lacy at Naples and Corfu.