The Secret Life of Money: A Kid's Guide to Cash (Paperback) 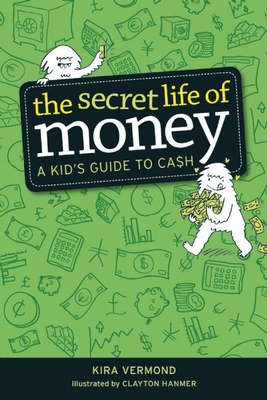 The Secret Life of Money: A Kid's Guide to Cash (Paperback)


Currently Unavailable
If discussing money is a difficult task for adults, it's doubly so where kids are involved. Not only is the subject loaded with cryptic jargon (mortgages? Bull markets? Huh?), but it often fails to click with how a kid sees his or her world. Many preteens and young teens do not yet have a job, and even if they do, their responsibilities with their earnings are miles away from grown-up money issues. In other words, not only is money a little overwhelming and mysterious, it's also seen as something they can't do anything about. The Secret Life of Money is written to address this last point in particular. It's central message is that money affects us deeply and that even kids can have an effect on it, too. This book uses odd anecdotes, engaging comics, and a wealth of surprising everyday connections to help young readers see and understand cash from an entirely different angle. From the history of different currencies to why we buy what we buy, from how charities and credit cards work to saving and investing, and a whole lot more, readers will gain not only an appreciation for the myriad ways that money changes, influences, and (even) betters their lives, they will arrive to an understanding of the control they have over it.

Kira Vermond is an award-winning writer and longtime freelancer from Guelph who rarely has a free moment to relax. With over 1,000 articles under her belt, Canadians have read her travel, career and money columns for The Globe and Mail and Chatelaine and listened to her career advice on CBC Radio weekday mornings for years. In 2010, Chatelaine and John Wiley published her book Earn, Spend, Save: The savvy guide to a richer, smarter, debt-free life. Kira also contributes to OWL Magazine, Today's Parent, Parents Canada, Canadian Family, PROFIT, FORUM Magazine, and many other consumer and trade publications. Clayton Hanmer is a Toronto-based illustrator and graphic artist. He has illustrated and designed numerous titles for Owlkids Books, including Elin Kelsey's award-winning Not Your Typical Book About the Environment, and his own activity book, CTON's Super A-Maze-Ing Year of Crazy Comics. He writes and illustrates "CTON's Corner," a popular feature in OWL Magazine each month. The winner of many industry awards, his work appears in such diverse publications as National Geographic Kids, The Globe and Mail, The Walrus and the New York Times.

Whether you already know how to read the stock markets, or you’re starting from scratch, this book is going to give you the goods to see money in a whole new way.”
from the book