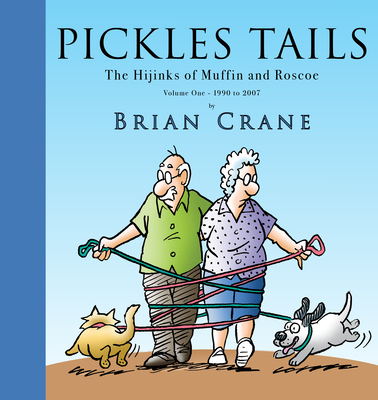 Pickles Tails Vol. I is Brian Crane's first collection dedicated to the beloved Pickles family pets, Roscoe and Muffin, and their wily ways. This hardcover collection, the first in a two-volume set, contains the daily and Sunday strips that feature Roscoe and Muffin from Crane's earliest work in 1990 through 2007. This volume tracks Brian's early days with the Pickles appearing in black-and-white, to the beginning of his full-color Sunday strips. All of the beloved Pickles characters are here, playing, cuddling, gently scolding, and loving wholeheartedly their favorite furry friends

-Brian Crane's Pickles is syndicated in over 900 newspapers worldwide. He has been nominated three times for the Outstanding Cartoonist of the Year award by the National Cartoonists Society and won the award in 2013. As of the printing of the first edition of Pickles Tails: Volume One, Pickles is once again in the running for the National Cartoonist Society's Best Comic Strip of the Year, a prestigious award that the strip has been nominated for twice before, and that it won in 2001, and again in 2019. Crane lives in Sparks, Nevada, with his wife and family, which consists of seven children and twenty-one grandchildren.