The Life to Come (Hardcover) 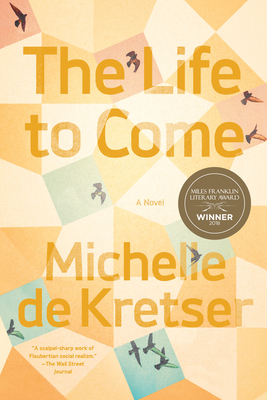 By Michelle de Kretser
$26.00
Email or call for price

"For a novel concerned with dislocation, there's a lot of grounding humor in The Life to Come. Most of it comes at the expense of Pippa and her ilk, but de Kretser's observations are so spot on, you'll forgive her even as you cringe." --New York Times Book Review

Set in Australia, France, and Sri Lanka, Miles Franklin Award-shortlisted The Life to Come is about the stories we tell and don't tell ourselves as individuals, as societies, and as nations. Driven by a vivid cast of characters, it explores necessary emigration, the art of fiction, and ethnic and class conflict.

Pippa is an Australian writer who longs for the success of her novelist teacher and eventually comes to fear that she "missed everything important." In Paris, Celeste tries to convince herself that her feelings for her married lover are reciprocated. Ash makes strategic use of his childhood in Sri Lanka, but blots out the memory of a tragedy from that time and can't commit to his trusting girlfriend, Cassie. Sri Lankan Christabel, who is generously offered a passage to Sydney by Bunty, an old acquaintance, endures her dull job and envisions a brighter future that "rose, glittered, and sank back," while she neglects the love close at hand.

The stand-alone yet connected worlds of The Life to Come offer meditations on intimacy, loneliness, and our flawed perception of reality. Enormously moving, gorgeously observant of physical detail, and often very funny, this new novel by Michelle de Kretser reveals how the shadows cast by both the past and the future can transform and distort the present. It is teeming with life and earned wisdom--exhilaratingly contemporary, with the feel of a classic.

Michelle de Kretser was born in Colombo, Sri Lanka. Her family emigrated to Australia when she was a teenager, and she was educated in Melbourne and Paris. She is the author of four previous novels--including the Miles Franklin Award-winning Questions of Travel and the Man Booker Prize-longlisted The Lost Dog--and a novella, Springtime. De Kretser now lives in Sydney with her partner, the poet and translator, Chris Andrews. She is an Honorary Associate of the English Department at the University of Sydney.

Praise for The Life to Come by Michelle de Kretser

Longlisted for the 2018 Stella Prize

"For a novel concerned with dislocation, there's a lot of grounding humor in The Life to Come. Most of it comes at the expense of Pippa and her ilk, but de Kretser's observations are so spot on, you'll forgive her even as you cringe." —The New York Times Book Review

“[The] characters give de Kretser, herself a native of Sri Lanka who lives in Sydney, a chance to explore the complexity of societies in the long throes of mistreatment of their ethnic minorities, whether those are Aboriginal people, Indians, Sri Lankans in Australia, or Algerians in Paris. . . . There is also much pleasure to be found in de Kretser's lovely prose, whose every sentence fiercely shines. A thought-provoking novel of both beauty and brains.” —Kirkus Reviews (starred review)

“[De Kretser] has again written a perceptive and articulate novel that blends acute observation and well-chosen details to create a sweeping story that is painfully close to home. With fascinating characters and beautifully nuanced writing, The Life to Come is a powerful exploration of the human condition and a compelling examination of how we look at each other and ourselves.” —Booklist (starred review)

“This marvelous stylistic work, dense with lush descriptions of scents, Asian food, Australian trees and flowers, weather, and Sydney neighborhoods, reflects on issues of race, immigration, and what it means to be an Australian: so different from America—or is it? Highly recommended.” —Library Journal (starred review)

“While each section can stand alone, together they create a joyful and mournful meditation on the endless small pleasures and complications of life: the difficulties of immigration, the logistics of infidelity, the creativity and insight born of jealousy and spite. In de Kretser’s sure-footed and often surprising prose, life is rendered as something that’s 'tedious yet require[s] concentration, like a standard-issue dream.'” —Publishers Weekly

"Reflecting a pessimism that's almost refreshing in its candor, The Life to Come is mordantly skeptical about mankind's capacity for empathy. . . .The novel is filled with brilliant, quick-fire characterizations. . . . A scalpel-sharp work of Flaubertian social realism—but now the provincial setting whose customs it mercilessly dissects encompasses all Australia, if not all the world." —Wall Street Journal

“De Kretser's writing captures, with unflagging wit, grace and subtlety, the spiritual as well as physical journeys of people on the move—between cultures, mindsets and stages of growth. . . . She writes about the aura and texture of places with breath-stopping virtuosity. . . . De Kretser excels at mordant takedowns—of right-on dinner parties, literary festivals where TV chefs hog the limelight, faddy diets—but she grants all her people the mystery of inwardness.” —Boyd Tonkin, The Financial Times

“The Life to Come is a rich, sensory evocation of the sights and smells of a city from which the real substance of sights and smells appears to have been eviscerated. Celeste asks her mother, 'Why do Australians go on so much about food?,' and receives the reply: 'Because they live in a country of no importance.'” —Public Books

“The Life to Come namechecks—with a characteristically ironic flourish—Patrick White and Christina Stead (‘safely great … safely dead’), and includes a tribute to the ‘fearless’ Shirley Hazzard. De Kretser belongs in that estimable company. She is every bit their equal as a stylist, and in her willingness to apply the acid.” —James Ley, Sydney Review of Books

“Five days into 2018, is it possible we already have the year’s best novel? I’ll be amazed if anything surpasses this compulsive, exquisitely light-footed narrative composed of four loosely linked episodes seesawing between a sprawling cast spread over three continents. . . . One might puzzle over what it all adds up to, but complaining about the lack of an overarching plot feels churlish given the other riches on offer in this glorious novel.” —Anthony Cummins, The Daily Mail (UK)

“The Life to Come . . . has five overlapping stories which, while being character-driven, reflect a particular concern with history and place. . . .Michelle de Kretser is a writer of unsentimental humanity.” —Donald McDonald, thespectator.co.uk

“There is an enjoyably acute observation on almost every page of Michelle de Kretser's new novel. . . . As always, Michelle de Kretser offers a wide compassionate view to contain the cruel specific thoughts and accounts of past wrongs.” —Lindsay Duguid, The Times Literary Supplement (London)

“Flowing from poignancy to eloquence to delightfully wry satire, The Life to Come's richness of prose and character is meant to be savored and reflected upon.” —Foreword Reviews

“This spellbinding story follows a cast of characters as they chase their ideal version of life. Incredibly perceptive and uncannily contemporary, it is a satirical take on modern society.” —Rabeea Saleem, Book Riot UK

“Michelle de Kretser understands the power of detail, its ability to encapsulate and to express bigger matters. . . . The Life to Come is an astonishing book, fiercely intelligent, wise and subtle, unhurried and generous.” —Anna Rogers, New Zealand Listener

“The Life to Come is a remarkable achievement . . . . It's a book of myriad miniature overlapping stories, shot through with subtle leitmotifs, which brilliantly captures the expectant thrum of a world where the future is always about to happen.” —The Saturday Paper (Australia)

“With wit and aplomb, Michelle de Kretser unpacks the eloquent silences that surround us to reveal the issues that we deny, suppress and ignore, exposing our flawed assumptions about other people. And she is wickedly funny.” —Lisa Hill, ANZ LitLovers LitBlog

“The Life to Come is an intense reading experience. . . . Michelle de Kretser has written a comic lament of disarming force.” —Michael McGirr, The Age

“De Kretser's great strength as a writer is her capacity to render the sensory and the sensual. . . . She is tactile and hyper-observant, as are her characters; the pleasure of this novel is in watching her watch them.” —Beejay Silcox, Australian Book Review

“The Life to Come. . .has five overlapping stories which, while being character-driven, reflect a particular concern with history and place. . . .Michelle de Kretser is a writer of unsentimental humanity.” —The Spectator

“Although The Life to Come is not a political novel, it is a book that captures the political, social and economic zeitgeist. The beautifully drawn and complex characters are all creatures of the time.” —Brigid Delaney, Guardian Australia

“This is a gorgeous, delicately surprising piece of writing. . . . It's like spirit photography, all fuzzy outlines and unaccountable light: a snapshot of something that may or may not exist.” —Terrence Rafferty, The New York Times Book Review

“Each bite-sized chapter of this charming book is punctuated by a revelation, whether mundane or otherworldly, that reminds us that we all inhabit not just space, but time. It's a fast and captivating read, leaving us to wonder what we might be missing as we wander through the landscapes of our own lives.” —Ginny Greene, The Minneapolis Star Tribune

“The literal ghost story begins when Frances spots a woman in a vintage dress eerily flouncing about the gardens, though that won't be the only phantom to torment her throughout the tightly written, densely packed story.” —Ryan Porter, Toronto Star

“A dark gem of a book . . . .One reads Springtime not for its shock value—this tale is much more subtle than that—but for the way De Kretser explores the nature of ambiguity and for her deliciously unsettling descriptions.” —Andrew Wilson, The Independent

“Springtime is a wonderful reminder of the good things that can happen when publishers take on shorter works….It’s a ghost story, albeit a thrillingly self-aware and light-footed one….While Springtime is preternaturally alert to its antecedents—despite the bell-like clarity of de Kretser’s prose the story suggests something of a thrilling sublimation of Henry James’s supernatural fiction—it is also exquisitely modern.” —James Bradley, The Australian

“A dazzling performance....It is impossible to describe de Kretser’s prose as anything but rich, luxuriant, intense, and gorgeous.” —Anita Desai, New York Review of Books

“The Hamilton Case is one of the most remarkable books I’ve read in a long while—subtle and mysterious, both comic and eerie, and brilliantly evocative of time and place.” —Hilary Mantel

“De Kretser has pulled off something remarkable.” —Laura Miller, Salon

“A miniature masterpiece of a mystery….De Kretser’s prose is stunning.” —Lev Grossman, Time

“A gripping story….elegant and subtle….This is the best novel I have read in a long time.” —A.S. Byatt, Financial Times

“Engrossing….De Kretser keeps us in suspense even as we read simply for the pleasure of her prose.” --Moira Macdonald, Seattle Times

“As fiercely compelling as any whodunit….Reading The Lost Dog one is torn between contradictory urges—to race ahead, in order to find out what happens, and to linger in admiration of de Kretser’s ravishing style.” —Jane Shilling, New Statesman

“A persuasive vitality and an ethical alertness that give keen observation relevance and wit….De Kretser’s displaced and subtle characters are genuinely interesting, and her writing is emotionally accurate….A fine novel.” —Ursula K. Le Guin, Guardian

Praise for Questions of Travel (2014)

“It is not really possible to describe, in a short space, the originality and depth of this long and beautifully crafted book.” —A.S. Byatt, The Guardian

“Novel by novel, the Sri Lankan-born Australian has emerged as one of the most fiercely intelligent voices in fiction today.” —Boyd Tonkin, The Independent

“After the early success of de Kretser’s previous novels, Questions of Travel should ensure her place as a serious international novelist of the first rank.” —The Economist

“Her discourse on travel is beautifully buried in the rich cake of the narrative.” —Frank Poorhouse, The Guardian

“It’s hard to read Australian Michelle de Krester’s Questions of Travel without a tinge of regret, knowing that, after it, other new fiction is bound to disappoint for a while.” —Emily Donaldson, Globe and Mail (Toronto)