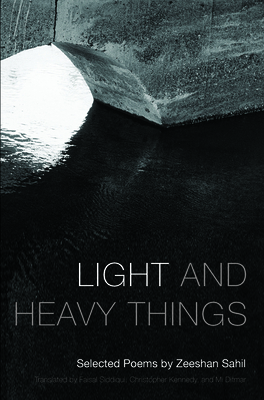 Zeeshan Sahil was born in Hyderabad, Sindh, in 1961. He published eight collections of poetry in Urdu as well as critical articles and texts for broadcast on radio.

Zeeshan Sahil was born in Hyderabad, Sindh, in 1961 and went to school there. He started writing poetry in 1977 and has published eight collections of poetry in Urdu. His prose writings include critical articles and texts for broadcast on radio. He also had a brief association with the National Book Council of Pakistan. Described as a shy man, critics have praised Zeeshan Sahils poetry for its sensitivity and simplicity, as well as his post-modern approach. Christopher Kennedy grew up in a working-class suburb of Syracuse, New York. He received a B.A. in English from LeMoyne College and a M.A. in Creative Writing/English from Syracuse University, where he is currently the Director of the M.F.A. Program in Creative Writing. Kennedy has published four collections of poetry: Ennui Prophet (BOA Editions 2011), Encouragement for a Man Falling to his Death (BOA Editions 2007) which recieved the Isabella Gardner Poetry Award in 2007, Nietzsche's Horse (Low Fidelity Press), Trouble with the Machine (Mitki/Mitki Press), as well as one chapbook of prose poems, Greatest Hits. His writing has appeared in print and electronic journals including Ploughshares, The Threepenny Review, Double Room, and Del Sol Review, among many others. One of the founding editors of the literary journal 3rd Bed, Kennedy has received fellowships and awards from the Onondaga County Cultural Resource Center, the New York Foundation for the Arts, and the Saltonstall Foundation for the Arts. Mi Ditmar was a student in the MFA program in Creative Writing at Syracuse University where she received the Joyce Carol Oates Award and the Delmore Schwartz Prize. Her poetry has appeared in Stone Canoe and her fiction has appeared in The Alaska Quarterly Review. She is a research project coordinator in the field of public health. Faisal Siddiqui was born and raised in Karachi, Pakistan. He has been published in Salamander, Poet Lore and International Poetry Review and has upcoming publications in Malahat Review, Notre Dame Reviewand New Letters.