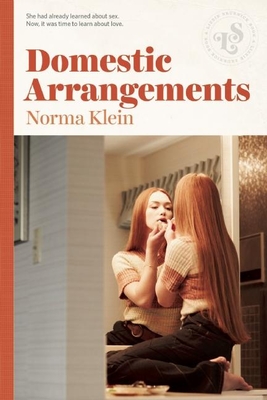 Originally published in 1982, Domestic Arrangements is the story of a fourteen-year-old New York teen named Tatiana, an unintentional ing nue who becomes notorious for filming a nude scene for a major movie. Tatiana's newfound fame--which includes interviews, magazine covers, and publicists--is set against the backdrop of an increasingly adult personal life, as her parents file for divorce, her sister becomes increasingly jealous of her sibling's success, and she must choose between her teenage boyfriend and new, older loves. A stunning example of Norma Klein's fearless take on the complexities of adolescence, Domestic Arrangements is an indelible portrait of a girl on the cusp of adulthood, learning to balance the challenges of life in the spotlight with love, family, and friendship. This edition features a brand new introduction by Norma's long-time friend, renowned children's author Judy Blume.

Norma Klein was best known for young adult works that dealt with family problems, childhood and adolescent sexuality, as well as social issues like racism, sexism, and contraception. Her first novel, Mom, the Wolf Man and Me (1972), was about the daughter of an unmarried, sexually active woman. Her subsequent works included Sunshine, It's Okay If You Don't Love Me, Breaking Up, and Family Secrets. Because of their subject matter, many of her books sparked considerable controversy, and a 1986 American Library Association survey found that nine of her novels had been removed from libraries. In an interview that same year with the New York Times, Klein said: I'm not a rebel, trying to stir things up just to be provocative. I'm doing it because I feel like writing about real life. She died in 1989 at the age of fifty.

One of the most banned and beloved teenage authors of her era, Norma Klein is the author of over 50 books for adults, children and young adults. Taking on racism, homosexuality, adoption, and teenage sexuality, Klein introduced readers to complex topics with humor, depth, and complexity. In an interview, she commented, I'm not a rebel, trying to stir things up just to be provocative. I'm doing it because I feel like writing about real life. She died in 1989 in New York City at the age of fifty.