There Is No Unhappy Revolution: The Communism of Destitution (Paperback) 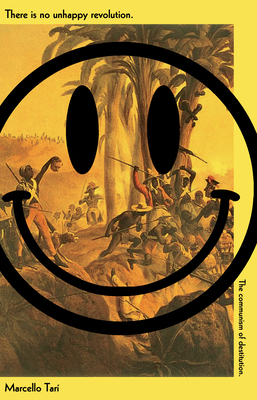 "A powerful case for the persistent questioning and existential interruption that accompanies that pursuit of happiness and revolution], and fuels it, and constitutes and ruptures its vagrant, open end."--Fred Moten, author of In the Break: The Aesthetics of the Black Radical Tradition

"It is hard today to escape the perception that financial violence and fascism are suffocating every possibility of happiness...There Is No Unhappy Revolution shows a possible way out from this despair."--Franco "Bifo" Berardi, author of Futurability: The Age of Impotence and the Horizon of Possibility.

In a time of ongoing political, economic, and climate crisis can we afford our collective unhappiness any longer? There Is No Unhappy Revolution gives expression to the age of revolution unfolding before us. With equal parts sophistication and raw urgency, Marcello Tar identifies the original moments as well as the powerful disruptive and creative content haunting our times like a specter.

The age of revolution is back, and with it, instability and uncertainty as major markers of our times. There is a renewed faith in popular rebellion as a means to enact sorely needed systemic change. At the heart of these dynamics rests a new theory of social change and societal well-being. Happiness is collective, not individual, as Marcello Tar explains, and our collective desire for happiness is a revolutionary force that cannot and should not be contained.

One hundred years after the October Revolution, amidst our current civilizational crisis, is it still possible to think and build communism? Yes, Tar responds, provided we radically rethink the tradition of revolutionary movements that have followed one century to another. Offering both a militant philosophy and a philosophy of militancy, he deftly confronts the different contemporary movements from the Argentinean insurrection of 2001 to Occupy Wall Street, the Spanish Indignados, the French movement against the labor law, and the Arab Spring, resurrecting and renewing a lineage of revolutionary thought, from Walter Benjamin to Giorgio Agamben, that promises to make life livable.