Top This and Other Parables of Design: Selected Writings by Phil Patton (Paperback) 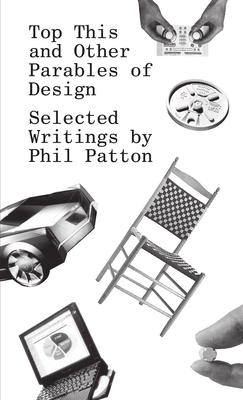 Top This and Other Parables of Design: Selected Writings by Phil Patton (Paperback)

An intimate and portable volume of the writings of Phil Patton

In September 2015 the world lost Phil Patton--prolific design writer, teacher and tantalizing wordsmith. Patton's insatiable curiosity, sense of humor and keen eye made for the most compelling reads. Whether he was chronicling design minutia, quirky anecdotes or bizarre tales, Phil's hundreds of books, columns, articles and posts always delivered a new account. As his editor at i-D magazine, Chee Pearlman, said, "His insight takes the reader beyond the object to an understanding of its broadest sociological context." No topic eluded him, and for a large part of his 40-year career he championed automobiles, technology and product design. Roger Black, designer, writer and longtime colleague and friend of Patton's wrote, "He taught The New York Times--by example--to cover design. The domino effect, the rest of the media followed." With an introduction by Edward Tufte and foreword by Caroline Baumann, this volume compiles 40 selections representing the wide range of interests and fascinations that occupied his thoughts. Punctuated by images of ideas and lists from notebooks he carried everywhere, Top This and Other Parables of Design is an intimate and portable companion for those who choose to always have a witty, informed friend around.
Phil Patton (1952 - 2015) was a design journalist, curator, and the author. He wrote regularly about automobile design for the New York Times. His books include Open Road: A Celebration of The American Highway; Made in USA: The Secret Histories of the Things that Made America; Bug, a cultural history of the Volkswagen Beetle; and Dreamland, about the culture of experimental aircraft. He has served as a curator for museum exhibitions, including Cars, Culture and the City at the Museum of the City of New York (2010), Curves of Steel: Streamlined Automobile Design at the Phoenix Art Museum (2007), and Different Roads: Automobiles for the Next Century at The Museum of Modern Art in New York (1999). He taught in the Design Crit Program at the School of Visual Arts and was a contributing editor to Esquire, ID, and Departures magazines. Patton was a regular contributor to CBS News, Today, CBS Sunday Morning, The Charlie Rose Show, Fresh Air, All Things Considered, and Talk of the Nation.Caroline Baumann became the Director of Cooper Hewitt, Smithsonian Design Museum in 2013. From 1995 to 2001, Baumann held several leadership positions at The Museum of Modern Art. Prior to that, she was Director of Development for The Calhoun School in New York City. Baumann is a member of the Royal College of Art USA, a NYCLandmarks50 Alliance member, a member of the Dwell On Design NY Advisory Board, and a member of the MAS Design First Advisory Committee. She earned a master's degree in medieval art from New York University's Institute of Fine Arts. She also received a bachelor's degree in the history of art and French literature from Bates College in Lewiston.