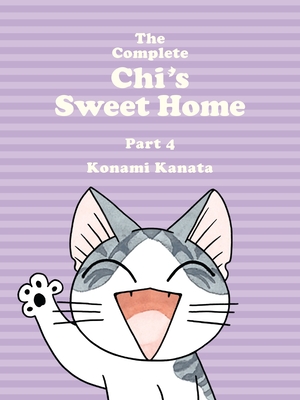 After six years in North America the Chi's Sweet Home saga has finally come to an end! Chi, Blackie, Cocchi and the rest will wrap up their adventures near Green Park in this final collection. But before Chi moves on to her new role as a 3DCG anime star, will she find her new home? Or will she decide to move away in search of new adventures?
Konami Kanata was born on July 3, 1958, in Nagano, Japan.  A veteran manga artist Konami made her professional debut in 1982 with the serialized comic Petit Cat Jam-Jam for Kodansha's semenal shoujo manga magazine NakaYoshi. The daughter of an elementary school teacher, most of Konami's stories are for readers of all ages making her one of the most accessible artists in recent history.

In her nearly thirty year career, Konami has penned more than a dozen comic series, with the majority of them focusing on cats and pets. Konami is well regarded within the pet-manga community for her keen sense of cat ecology. Her ability to observe and render feline behavior has earned her respect from the Japanese manga community as a whole. While most of her properties were published for a younger female demographic, her most recent series Chi's Sweet Home is currently being published by Kodansha's Morning magazine, Japan's leading comic magazine for adult readers.
"Chi is utter endearing. This omnibus edition is fantastic and I love it as a complement to the smaller volumes that provide a more Japanese experience." - Chris Beveridge, Fandom Post

"I think what drew me in was how honest and realistic this comic was. Don't expect crazy antics or story lines here. I enjoyed it for its realness and cuteness." - Book Pairings

"This is the perfect relaxing collection of comics for cat lovers." - Paper Clippers