Anti-Tech Revolution: Why and How (Paperback) 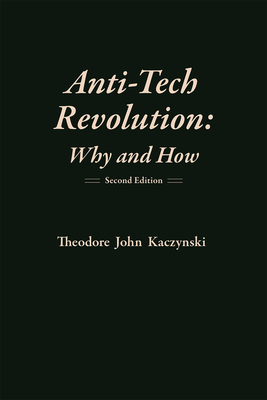 “There are many people today who see that modern society is heading toward disaster in one form or another, and who moreover recognize technology as the common thread linking the principal dangers that hang over us… The purpose of this book is to show people how to begin thinking in practical, grand-strategic terms about what must be done in order to get our society off the road to destruction that it is now on.” —from the Preface

In Anti-Tech Revolution: Why and How, Kaczynski argues why the rational prediction and control of the development of society is impossible while expounding on the existence of a process fundamental to technological growth that inevitably leads to disaster: a universal process akin to biological natural selection operating autonomously on all dynamic systems and determining the long-term outcome of all significant social developments.

Taking a highly logical, fact-based, and intellectually rigorous approach, Kaczynski seamlessly systematizes a vast breadth of knowledge and elegantly reconciles the social sciences with biology to illustrate how technological growth in and of itself necessarily leads to disastrous disruption of global biological systems. Together with this new understanding of social and biological change, and by way of an extensive examination of the dynamics of social movements, Kaczynski argues why there is only one route available to avoid the disaster that technological growth entails: a revolution against technology and industrial society.

Through critical and comprehensive analysis of the principles of social revolutions and by carefully developing an exacting theory of successful revolution, Kaczynski offers a practical, rational, and realistic guide for preventing the fast-approaching technology-induced catastrophe. This new second edition (2020) contains various updates and improvements over the first edition (2016), including two new appendices.

Note: Theodore John Kaczynski does not receive any remuneration for this book.

Theodore John Kaczynski, Ph.D. was born in 1942 in Chicago, Illinois. He attended Harvard at age 16, earned his Ph.D. in mathematics from the University of Michigan, and became assistant professor of mathematics at UC-Berkeley at the age of 25. After two years, Kaczynski resigned his professorship and moved to a remote wilderness area of western Montana to pursue a life-long ambition of living an autonomous and self-sufficient life from the land, which he did for 25 years. Kaczynski has been incarcerated since 1998 in rigorous confinement at Federal Prison ADX in Florence, Colorado, after receiving a life sentence for the long-term violent campaign he undertook to call world-wide attention to the colossal dangers inherent in technological growth.

“I recommend that you read this compelling perspective on how we can frame our struggles in a technological society.” —The Tech, MIT’s oldest and largest newspaper

“Anti-Tech Revolution is a true milestone in thinking about technology. It is a well-researched, well-written, and thoroughly-documented work dedicated to undermining the technological system before its worst consequences become reality. Nothing else like it exists. All those concerned with the future of humanity and the planet would do well to study it carefully.”  —Prof. David Skrbina, University of Michigan, Dearborn

“There are more than a few people who feel that society’s rush toward a technological future will lead to disaster . . . This is very highly recommended.” —Midwest Book Review

“In this thoughtful book, Dr. Kaczynski provides a blueprint for the radical anti-technology movement. If you want to stop AI before it’s too late, this may be your best bet.” —Dylan Evans, Ph.D., author, The Utopia Experiment

“A rational mind is on display in this book.” —Prof. Steve Fuller, University of Warwick, UK

“He is clearly a Luddite, but simply saying this does not dismiss his argument . . . As difficult as it is for me to acknowledge, I saw some merit in the reasoning in [Kaczynski’s writing].” —Bill Joy, founder, Sun Microsystems

“His work, despite his deeds, deserves a place alongside Brave New World, by Aldous Huxley, and 1984, by George Orwell.” —Dr. Keith Ablow, Fox News

“What [Kaczynski] presents is a sound moral argument with what should be eye-opening historical social illustrations that are, together, too numerous to refute.” —Jai Galliott, Ph.D. School of Engineering and Information Technology, UNSW Canberra